Toni Braxton Roasted for Flashing Her Nipple in New Photo

Believing that the 'Un-Break My Heart' hitmaker is not at an age where she should be showing off her body on social media, critics remind her that she is already a mother.

AceShowbiz - Toni Braxton isn't one to reveal her body too much on social media, but when she finally does that, she successfully creates a hot topic among social media users. That's exactly what happened when the 51-year-old singing diva posted on Instagram over the weekend a near-topless image of herself, though the majority of people didn't seem too fond of her action.

Even without filters and other such trickery, Toni proved how stunning her body is in the mirror selfie. She was seen lifting up her black T-shirt to reveal a glimpse of her nips and rocking a sexy sheer underwear in addition to a heart-shaped necklace. Completing her dark look was her black manicure and smokey eye makeup. Meanwhile, her hair was let a little bit messy.

Toni wrote in the caption, "Embracing my WHOLE body...hysterectomy scars and all," before crediting her gym Orange Theory for making her "feel 29 again! Love me some me!" 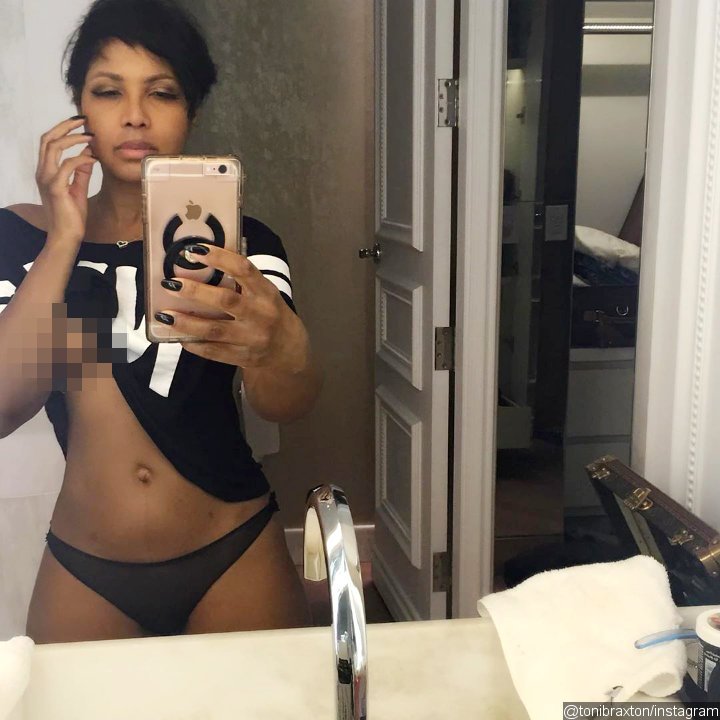 Toni Braxton flashed her nipple in a new photo.

After the "Un-Break My Heart" hitmaker posted the picture, people have since jumped into the comment section to blast her over the picture since they believe that Toni isn't at an age where she is allowed to show off her body like that. "You too old to be flashing. Toni know you got sons...keep it respectful!" one said. Someone offered a nicer criticism as saying, "Very beautiful but not needed. Young ladies are watching and lead by the behavior of the older generation. Less is more."

One other echoed, "This picture isnt what a 50 year old woman should be doing. You have sons , nieces , and nephews. What is the purpose of the picture? Is there value in it. I have always thought you were cute as a button." Meanwhile, another said, "WHY Toni??? A very disappointed loyal Fan...JESUS!!! SMH." There was also an individual who wished that her sons "never see this photo."

The negative responses aside, some people were still gushing over the picture. One was even so stunned by the photo that s/he need someone to "come get me off the damn floor." One other confessed to dropping her/his phone that resulted in a "shattered" screen because of the image.

Toni Braxton Roasted for Flashing Her Nipple in New Photo