The 'Lip Sync Battle' co-host calls the president 'p***y a** b***h' after he goes on a Twitter rant about people not giving him enough credit for supporting criminal justice reform.

AceShowbiz - Chrissy Teigen and President Donald Trump got into another heated war of words on Twitter though the latter has blocked the former on the social networking site. The president went after John Legend and his "filthy mouthed wife" after the singer appeared in an MSNBC special, a town hall about criminal justice with "MNC Nightly News" anchor Lester Holt, on Sunday night, September 8.

Trump began his rant, "When all of the people pushing so hard for Criminal Justice Reform were unable to come even close to getting it done, they came to me as a group and asked for my help. I got it done with a group of Senators & others who would never have gone for it. Obama couldn't come close..."

"....A man named @VanJones68, and many others, were profusely grateful (at that time!). I SIGNED IT INTO LAW, no one else did, & Republicans deserve much credit. But now that it is passed, people that had virtually nothing to do with it are taking the praise," he continued, complaining that people didn't give him enough credit for passing the First Step Act.

He went on attacking John and Chrissy as writing, "Guys like boring musician @johnlegend, and his filthy mouthed wife, are talking now about how great it is - but I didn't see them around when we needed help getting it passed."

He added, " 'Anchor' @LesterHoltNBC doesn't even bring up the subject of President Trump or the Republicans when talking about ..the importance or passage of Criminal Justice Reform. They only talk about the minor players, or people that had nothing to do with it...And the people that so desperately sought my help when everyone else had failed, all they talk about now is Impeaching President Trump!" 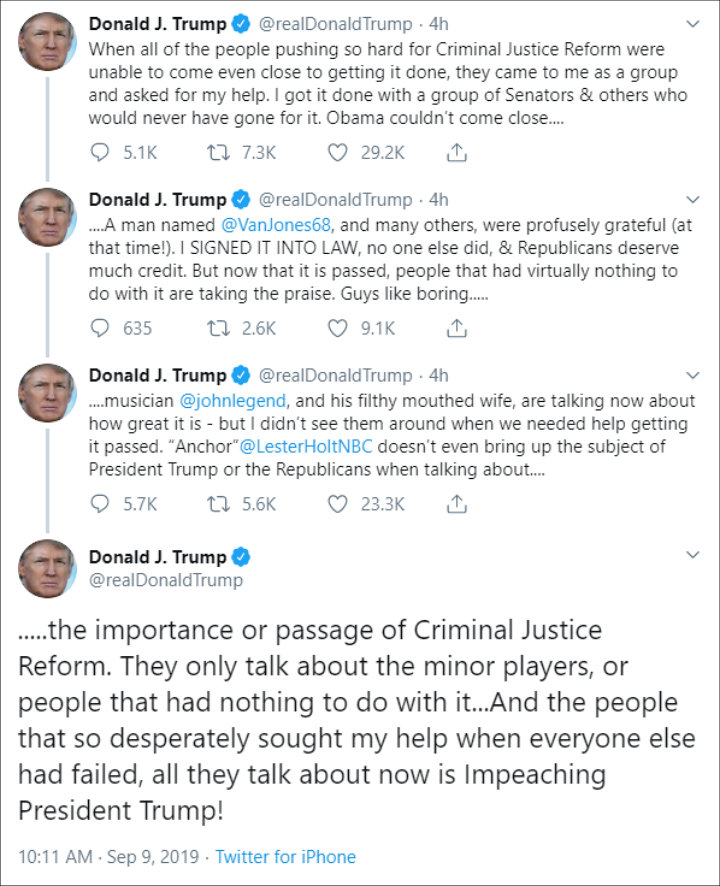 Chrissy has clapped back at Trump with a vulgar response. "no guys no please do not make this trend, for it is my fight with #PresidentP***yA**B***h, not yours!!!!!!" she tweeted, as people have been talking about it on social media. 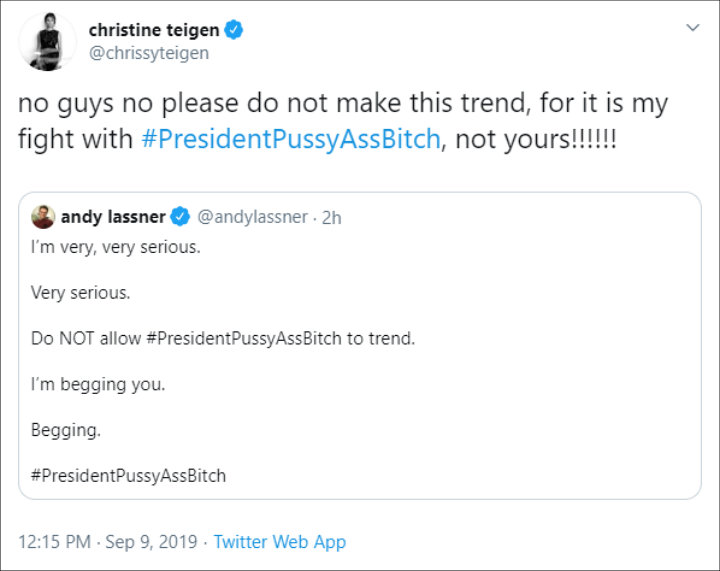 The 33-year-old brought it up in another tweet about her making a sign for her daughter Luna's first day of school. "Luna, remember the night before your first day of school? When mommy was making your sign and the p***y a** b***h president had his 9th meltdown of the day," she wrote. 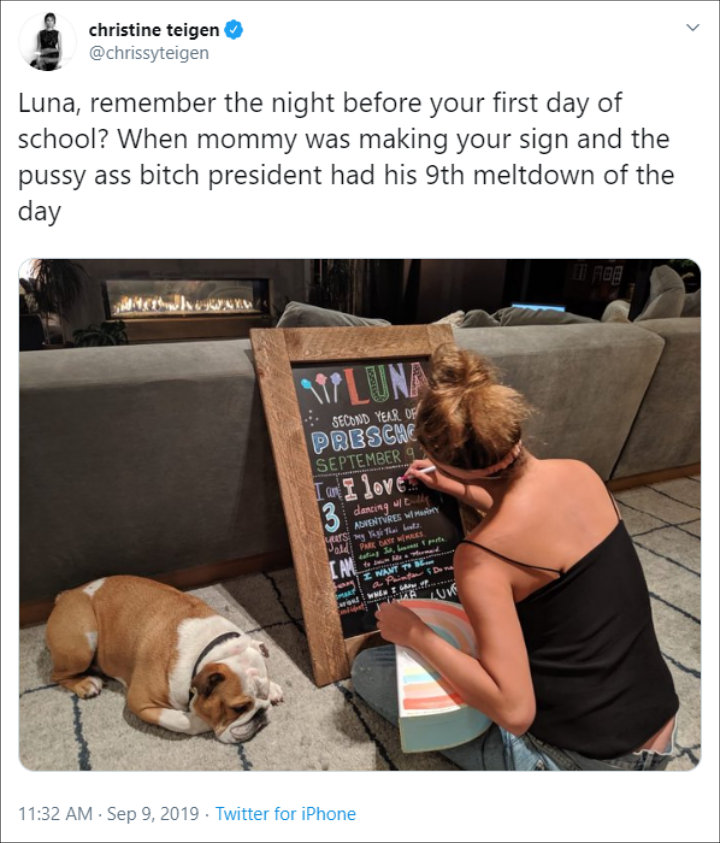 Meanwhile, John implored Melania Trump to help solve Trump's issue. "Imagine being president of a whole country and spending your Sunday night hate-watching MSNBC hoping somebody--ANYBODY--will praise you. Melania, please praise this man. He needs you," he responded on his own Twitter account, before adding, "Your country needs you, Melania."

People who reacted to Trump and Chrissy's Twitter feud have mostly taken the model's side and ridiculed the president. "Chrissy Teigen call The President a p***y a** b***h, will go down in history. I love it," one joked about the two's heated exchange. A second user commented, "Chrissy Teigen's 'p***y a** b***h' reply is the only thing will ever top Lebron [James]'s 'U Bum'!"

Another supported Chrissy, "If you come at the queen @chrissyteigen you best not miss." Someone else called out POTUS, "Trump has become like every other man on twitter-desperate to get Chrissy Teigen-s attention."