Taking to Instagram Stories, the 'Anna Wintour' rapper says of the Young Money femcee, 'I really pray that Nicki is not up to the evil sagittarian s**t I highly suspect she is...'

AceShowbiz - Nicki Minaj is apparently up to no good, or so Azealia Banks believes. The "Anna Wintour" rapper is convinced that the self-proclaimed black Barbie is trying to sabotage Megan Thee Stallion's career after she collaborates with her on hit single "Hot Girl Summer".

Azealia made the claim on Instagram Stories, explaining that Nicki made Megan get drunk on purpose when they were having an Instagram Live session together. "Nicki so evil she got meg drunk on purpose so she looks wild in the photo/video plus Nicki is WILD COKED.... ugh Nicki is so damn fake and evil I cannot," she said.

Later, she expressed her hope that the "Anaconda" rapper "doesn't try it with her" because Megan had to "push thru past loads of obstacles to get to this level..." Azealia added, "I really pray that Nicki is not up to the evil sagittarian s**t I highly suspect she is.... ugh, she is really the worst." 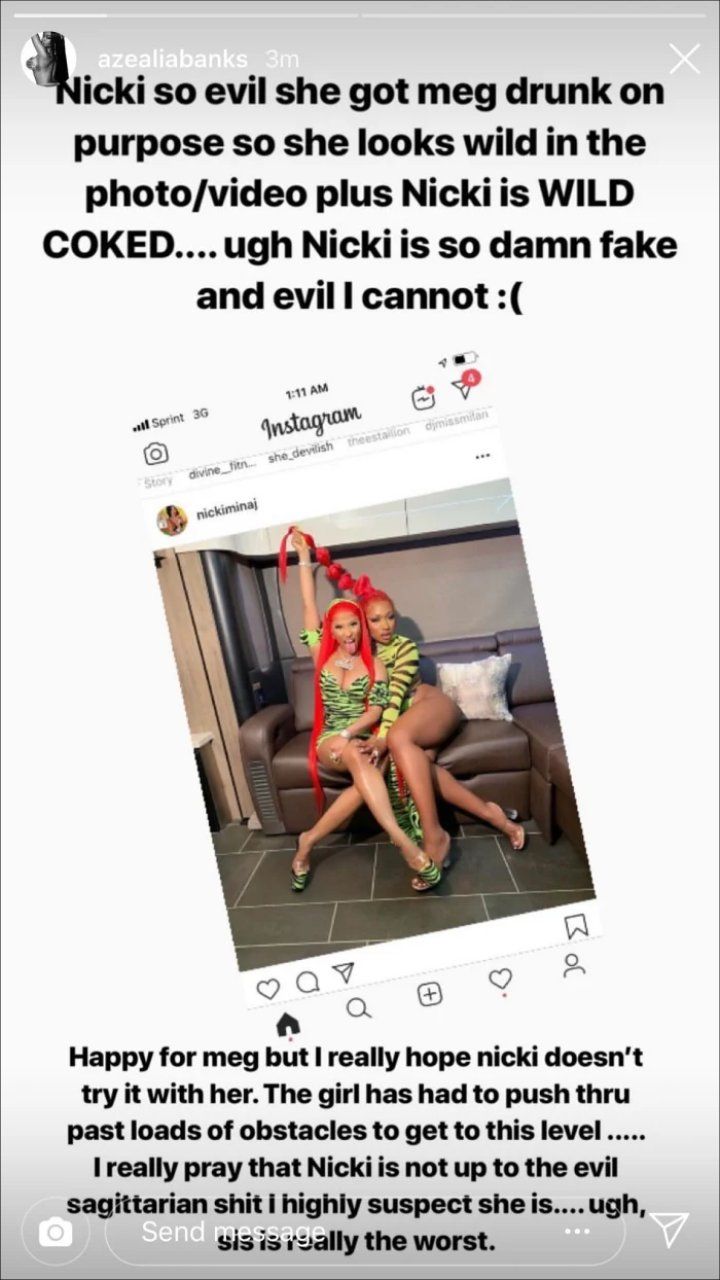 The Instagram Live that Azealia was referring to took place over the weekend, when Nicki and Megan talked about shooting the music video for "Hot Girl Summer". Megan said, "She did a lot, so I am going to swallow my pride and drive the boat for her. I have to drive the boat for the Barbie." Nicki, on the other hand, was seen mixing a liquor before giving it to Megan.

Sampling City Girls' "Act Up", "Hot Girl Summer" was released on August 9. Just hours after the release, the song, which also features Ty Dolla $ign, became the first-ever female rap collaboration to hit the top spot on iTunes chart in the United States.

Nicki shared her excitement over the news, "Yikes. Herstory in the making. Should I run up on meg toda & go live y'all? Or nah? Y'all deserve it for showing me how to go live with her that night. Y'all was mad aggy that night, cussing me out & s**t but I listened to y'all & look what happened to god be the glory love you."