Rihanna, in the meantime, spells out her frustration at Donald Trump's response to the deadly mass shootings in El Paso and Dayton by pointing out the ease of purchasing gun in the country.

Nine people were killed and 27 injured in an attack on revellers hanging out in Dayton, less than 24 hours after 20 lives were claimed in El Paso, Texas, when a shooter went on a rampage inside a Walmart store.

Witherspoon and Legend woke up to the news on Sunday and took to social media to react to the tragedy renew their calls for changes to current gun laws.

"Woke up to the news of #DaytonOH shooting. This senseless loss of life is unbearable," the actress tweeted. "When will our US representatives give the people of this country the common sense gun laws we are all demanding? I'm calling my congressman."

Singer Legend added: "My heart aches for El Paso and Dayton. Our nation is experiencing these traumas far too often and we need our leaders to take urgent action: take these weapons of war off the street and fight the evil ideology of white nationalism that motivates many of these terrorists."

He then turned on U.S. leader Donald Trump, insisting comments he has made about immigration has stirred up racism and hatred in America: "When we condemn the racist venom coming from the President's mouth and point out the bigotry of his policies, it's not an academic question, it's not a political game, it's about life and death. The President regularly inspires killers. He is a part of the problem," John added.

Trump was also quick to respond to the weekend of gun violence, tweeting: "The FBI, local and state law enforcement are working together in El Paso and in Dayton, Ohio. Information is rapidly being accumulated in Dayton. Much has already be learned in El Paso. Law enforcement was very rapid in both instances. Updates will be given throughout the day!" 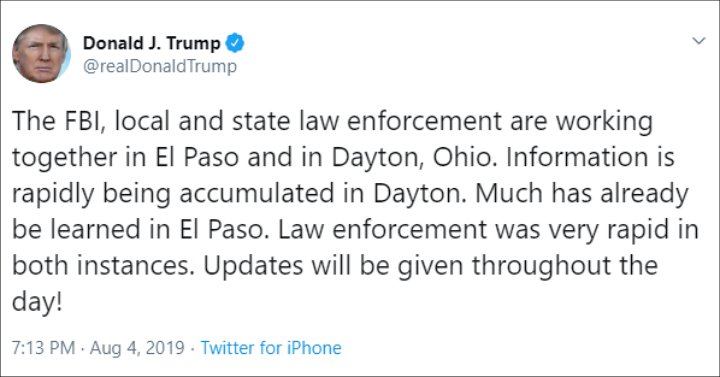 Rihanna took to Instagram with a response to Trump's tweet, stating: "Your country had 2 terrorist attacks back to back hours apart leaving almost 30 innocent people dead. This, just days after yet another terrorist attack in California, where a terrorist was able to LEGALLY purchase an assault rifle (AK-47) in Vegas, then drive hours to a food festival in Cali leaving 6 more people dead including a young infant baby boy!".

"Imagine a world where it's easier to get an AK-47 than a VISA! Imagine a world where they build a wall to keep terrorists IN AMERICA!!! My prayers and deepest condolences to the families and loved ones of all the victims from Texas, California, and Ohio! I'm so sorry for your loss! Nobody deserves to die like this! NOBODY!"

There were more reactions on social media from Kelsea Ballerini, who tweeted: "Went to bed feeling sick for El Paso and woke up feeling sick for Dayton...," Sarah Silverman, and singer Lizzo, who has family in the Dayton area.

Kelsea Ballerini was also among celebrities who addressed the mass shooting. 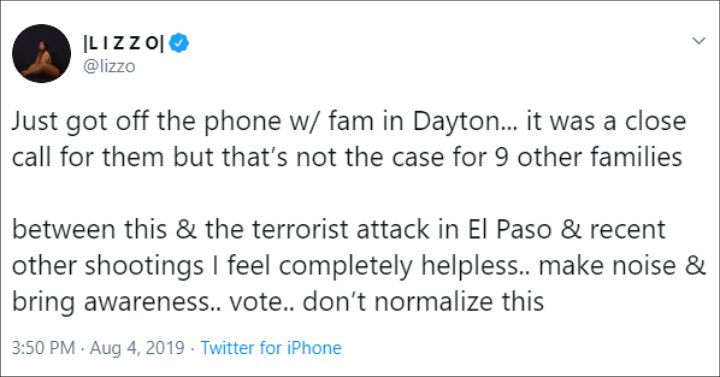 "Just got off the phone w/ fam in Dayton... it was a close call for them but that's not the case for 9 other families," she wrote. "between this & the terrorist attack in El Paso & recent other shootings I feel completely helpless... make noise & bring awareness... vote... don't normalize this."

Camila Cabello Hits Back at Body-Shamers: Fake Is Becoming the New Real

Reese Witherspoon Remembers Late PR Friend as Her 'Other Mother'

Reese Witherspoon Calls Herself 'Stupid' and 'Dumb' for Pulling 'Do You Know Who I Am?' Card

Reese Witherspoon Was Scared Being a Mom Would Ruin Her Career