Addressing the backlash in an interview, the 'Orange Is the New Black' actress says, 'Do we really want to have that conversation about trans men getting pregnant?'

AceShowbiz - Earlier this year, Laverne Cox was accused of overlooking pregnant transgender men over a tweet that she re-shared on her account. Addressing the backlash that she received at the time, the Emmy-winning actress said she felt "defensive."

Describing it as an "uncomfortable moment for me," Laverne said in an interview with British Vogue that she "felt defensive" because she merely wanted to be "in sisterhood with other women in that moment." The "Orange Is the New Black" star added, "I was being accused of erasing a trans male. That hits really close to home."

"I was also like, do we really want to have that conversation about trans men getting pregnant? Can it just not be complicated right now? Can we just keep it simple?" Laverne went on saying. "It's unfortunately not [simple]. And by keeping it simple, we erase people, we erase their experiences, we erase their existence."

Back in May, Laverne came under fire after she retweeted a post that read, "Woman's body. Woman's right to choose. End of story." While she did that to support the protest against Alabama's abortion ban, people blasted her because the tweet did not include transgender men and non-binary people who could get pregnant as well.

One tweeted, "Laverne you're really gonna erase our trans brothers' struggle in this fight by retweeting this? I admire you too much not to call that out. Trans people of all genders are oppressed by the realities and language of this fight, we need to stick together in solidarity." 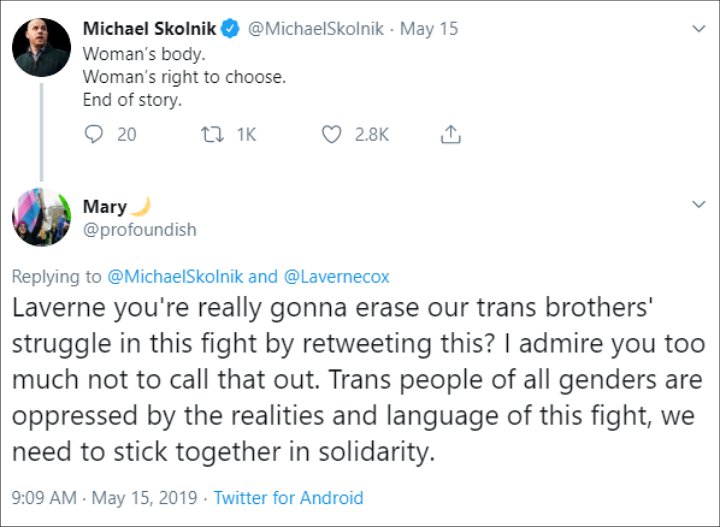 Laverne did not directly respond to the user, but replied to the original poster who said to the critic, "Thank you for calling me out on this. This learning here is very important for me and I am thankful for it." Answering the person, Laverne said, "We are all learning."

Keyshia Cole's Boyfriend Shares Picture of Her Going Into Labor