In a series of tweets, the 'Fancy' singer dishes that she has to pay $54 for the meal with an extra of $10.08 for knifes and forks when she ordered room service at her Las Vegas hotel.

AceShowbiz - Iggy Azalea was left fuming after being charged nearly $65 (£53) for a grilled cheese sandwich and cutlery to eat it with as she ordered room service at her Las Vegas hotel.

The "Fancy" singer took to Twitter to vent about the extortionate cost of the meal, tweeting on Saturday, July 27, "I just paid 54.00 (£44) for a grilled cheese sandwich. Las Vegas," alongside a GIF of Oprah Winfrey looking unimpressed. 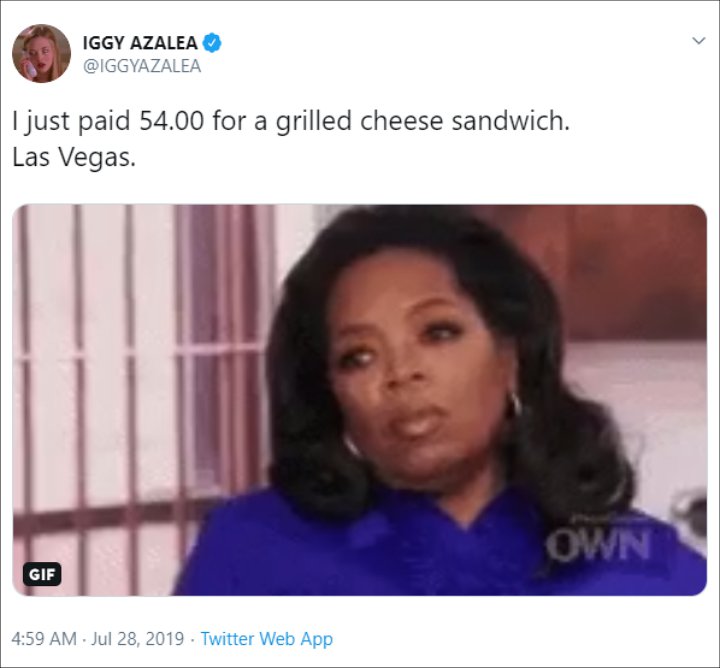 Adding to her anger, Iggy then revealed she'd been charged extra for her cutlery, telling her followers, "UPDATE: I'm not kidding I just got the bill and they charged me and (sic) extra 10.08 (£8.20) for knifes and forks which aren't included free here..."

Sharing a snap of herself chowing down on the expensive sandwich, Iggy added, "Plot twist: I'm reporting this card as stolen." She then told her fans that she'd been given a "complimentary bucket of ice" to make up for her displeasure at the room service cost, before adding, "There is no ice in the ice bucket."

The 29-year-old then joked she was looking for ways to make back her money, quipping that she was "wrapping up the HDMI cables" from the television and would be taking the ice bucket home with hers, sharing a joke classified ad for the bucket.

Iggy concluded her rant by posting a video of herself throwing the hotel's cutlery into one of her suitcases, leading to a fan commenting, "They gon (sic) have you on TMZ for stolen items. Can't wait."

But the ever-fiery Iggy hit back, "Can't steal what I have a receipt for!"

Nick Cannon Says Marriage Is 'a Lot': 'I'm Not Built for That'