Months after it was announced that Eddie Murphy will reprise his Prince Akeem role, the 'Harlem Nights' actor confirms that he will be back as Semmi in the sequel.

AceShowbiz - Arsenio Hall is set to team up with Eddie Murphy once more in a "Coming to America" sequel.

Paramount Studios chiefs announced in January that Murphy would return as Prince Akeem, an African prince who fled to Queens, New York to avoid an arranged marriage in the original 1988 comedy.

Reports over the weekend (July 20-21) speculated over Hall's return as Prince Akeem's assistant Semmi, and the funnyman took to Twitter to confirm the rumours on Monday.

"Arsenio Hall Officially Confirmed For 'Coming to America 2'," he wrote, linking to a Moviefone.com article claiming he would definitely reprise his role. 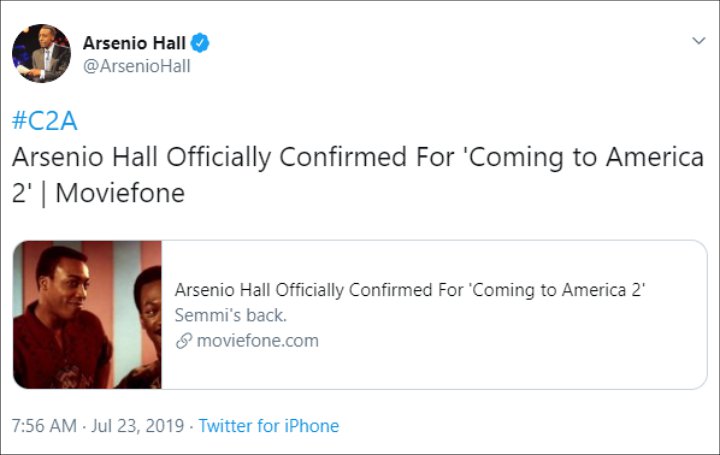 Arsenio Hall confirmed his return to the sequel of the 1988 comedy.

"Hustle & Flow" filmmaker Craig Brewer will direct the flick, which is set for a 2020 release, with "Black-ish" creator Kenya Barris reworking a script by Barry W. Blaustein and David Sheffield, who wrote the original.

Plot details are scarce, but according to Deadline, the movie will feature Akeem returning to America to meet his unlikely heir.

In addition to Hall and Murphy, the first film also starred James Earl Jones, Shari Headley and John Amos, and a young Samuel L. Jackson in a small role as a hold-up man.

Lamar Odom: Being Married to Khloe Kardashian Is 'the Best Part of My Adulthood'

Wesley Snipes Jokes on Failure to Be Part of 'Coming to America' Cast: It Still Hurts