With bad weather looming in Flint, Michigan, Centennial Fest organizers inform Kettering University students that the performance by the 'Can't Believe It' rapper had to be canceled.

AceShowbiz - T-Pain's concert at Kettering University in Flint, Michigan, on Saturday night (July 20) was cancelled due to severe storms.

University officials announced they would have to cut their centennial celebrations short due to the bad weather, meaning students would have to miss out on the "I'm On A Boat" rapper's gig.

"A severe thunderstorm is on its way to Flint. For the safety and security of all festival goers, musical acts, vendors, staff, and volunteers, Kettering University has decided cancel the remainder of the Centennial Fest," organisers wrote on Twitter. 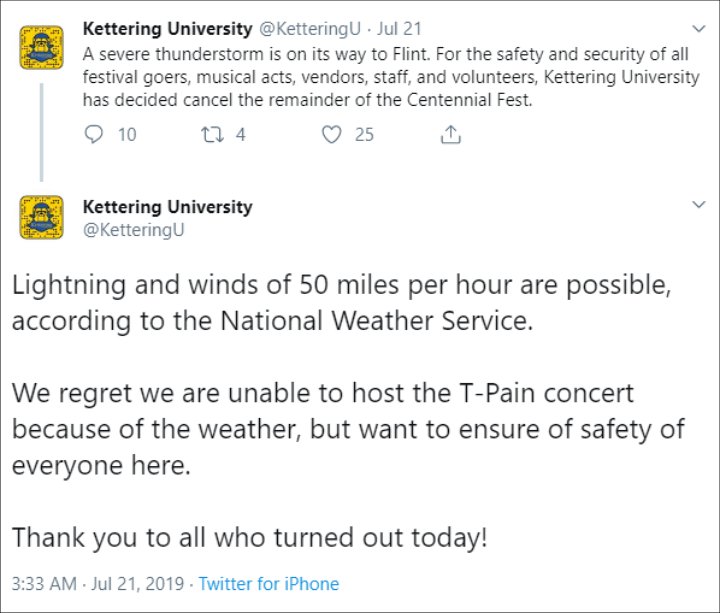 "Lightning and winds of 50 miles per hour are possible, according to the National Weather Service," they added. "We regret we are unable to host the T-Pain concert because of the weather, but want to ensure of safety of everyone here."

Cardi B Gets Fans Concerned After Posting Suicidal Message

T-Pain Slams Dallas Fans Over Low Ticket Sales to His Show: 'I'm Part of the City!'

Azealia Banks Claims 'We Like White' Beyonce Amid One-Sided Beef

Artist of the Week: Beyonce Knowles