Cardi B Gets Fans Concerned After Posting Suicidal Message

The 'I Like It' rapper tweeted and deleted, 'Wish I was dead' on Sunday, after defending herself from rape and 'blackfishing' accusations on social media.

AceShowbiz - Cardi B has caused her fans to worry about her well-being after she posted what sounded like a suicidal message. The Bronx femcee tweeted on Sunday, July 21, "Wish I was dead," after defending herself from rape and "blackfishing" allegations on social media.

According to a screenshot taken by a fan, Cardi posted the tweet at 9:18 A.M., but deleted it seconds later. The 26-year-old hip-hop star seemed to regret writing the tweet, but that's enough to spark concerns among her fans.

"yo did anyone else just see @iamcardib tweet 'wish i was dead'? girl are you ok???" one posted along with a screenshot of Cardi's disturbing tweet. Another fan tweeted, "Cardi don't f***in play with me! Don't be saying s**t like that @iamcardib." 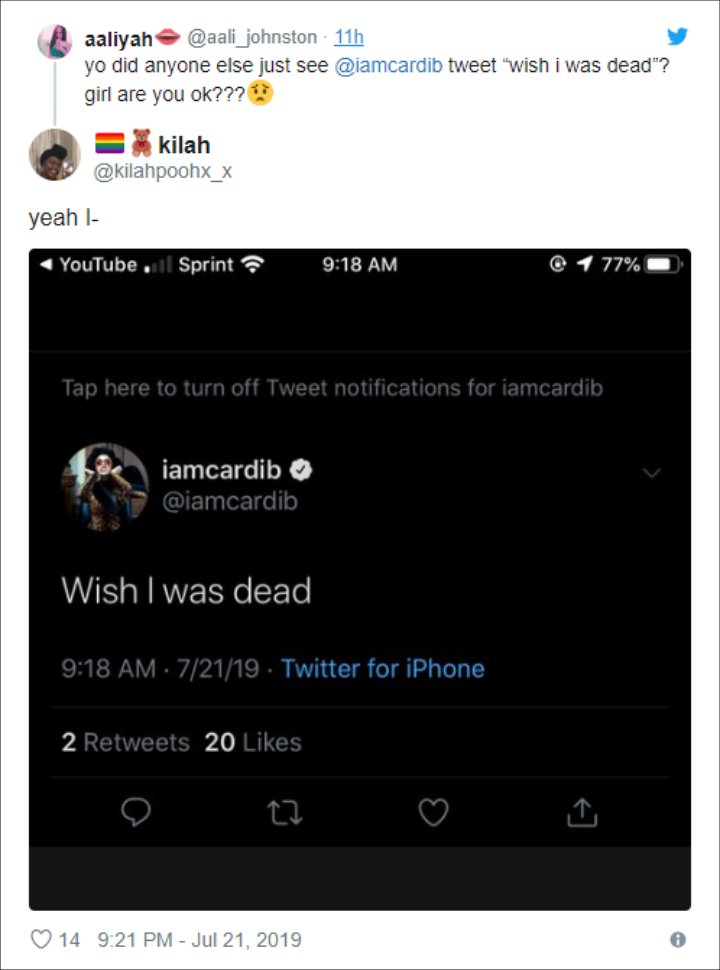 It's unclear what prompted Cardi to post the tweet, but she has been facing rape and "blackfishing" allegations. During Instagram Live session last Friday, she had to deny claim that she raped men while working as a stripper.

"I don't like when people be trying to call me a rapist," she said during the livestream. "I don't like that s**t. Because people tried to dig up something and make it something that I didn't do." She went on insisting, "I never touched nobody, I never f***ed nobody. And rape is when you f**k somebody without their consent or without asking."

She claimed that due to her popularity as a stripper in New York at the time, people would have found out very quickly if she had assaulted or drugged anyone. "If I was to ever harm or put a n***a in a situation, f**k jail, n***as would have cut my face [and] beat my a**," she added.

Cardi has also been accused of faking her race to profit off African-American solidarity and African-American rap culture. The controversy stemmed from debate over what being "black" means. Some people argued that Cardi is not black because her father is Dominican and her mother is Trinidadian.

"We just accept blackfishing as the real thing . Ok ...got it [sic]," one tweeted. Another posted, "Hair texture can be manipulated i#and every Afro that we saw from Cardi was a combed out braid down ... obviously [sic]."

In response to the manipulated hair texture accusation, the "Bodak Yellow" hitmaker later shared a picture from her childhood showing her with her natural Afro hair. "Was this Afro manipulated too ?" she wrote in the caption. 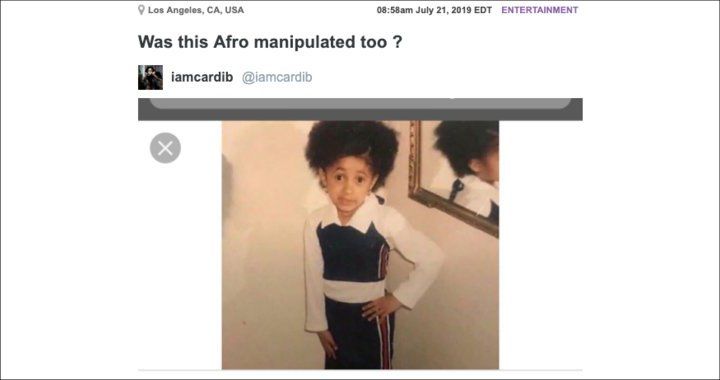 She also addressed her race during Instagram Live on June 26, "People just don't be understanding s**t," she said. "It's like, 'Cardi’s Latin, she's not Black.' And it's like, bro, my features don't come from...white people f****** okay?' And they always wanna race-bait when it comes to me...I have Afro features. 'Oh, but your parents are light-skinned'...all right, but my grandparents aren't."

Camila Cabello: I Do Not Let My Little Anxious Self Boss Me Around

Cardi B's Infamous Bonnaroo Catsuit Being Put Up for an Auction