The Columbus County Sheriff's Office initially announced that Jenelle's husband David Eason won't be charged for killing their dog because evidences indicated 'that the allegations of animal cruelty were fabricated.'

AceShowbiz - Jenelle Evans has refuted police's claims that she lied about her husband David Eason killing their family dog. The former reality TV star blasted "crooked" police after a fan asked her the truth about the reports, which have spread online.

Tweeting an article which reported that the "Teen Mom 2" alum fabricated the story for publicity, a fan asked her, "really is this true?" Replying to the fan's question, the mother of three wrote, "Definitely NOT. My story will be published soon. These police are crooked AF." 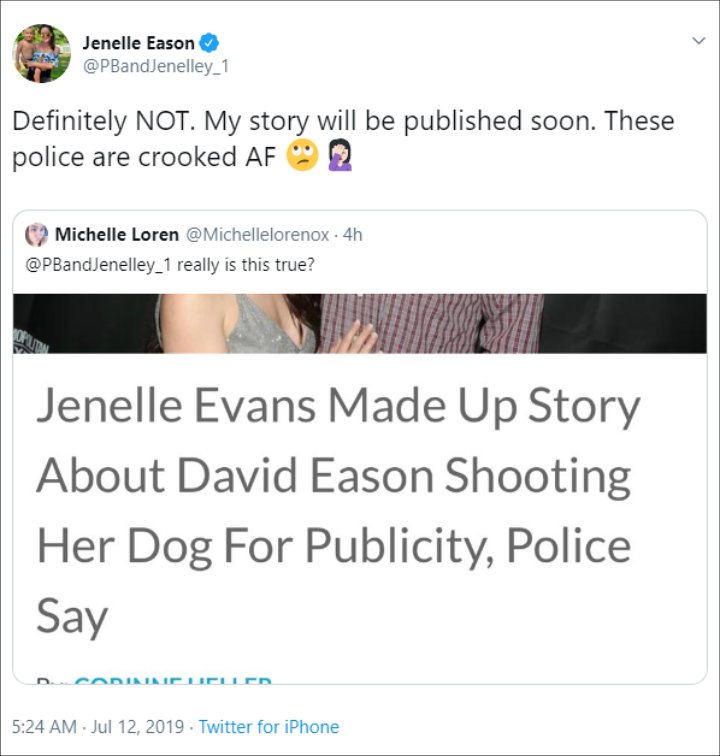 The Columbus County Sheriff's Office released a statement on Thursday, July 11 to address the case, in which Jenelle's husband David was alleged to have shot and killed their French bulldog. The authorities stated that David would not face charges because Jenelle fabricated the story for "publicity."

"Jenelle stated that the reason she filed the animal cruelty report was for the publicity and because she did not know where her dog was," stated. "The evidence collected indicates that the allegations of animal cruelty were fabricated. Therefore, Columbus County Sheriff's Office is closing this investigation. No charges will be filed in this case."

According to TMZ, when deputies first responded to Jenelle's report, she said that David took the dog outside and she heard a gunshot, though she never saw the dog got shot. However, several weeks later, during a follow-up interview, Jenelle allegedly changed her story, saying she never heard a gunshot and didn't know what happened to the dog.

When Jenelle first said the whole thing was just publicity stunt, police thought it was an excuse to end the investigation and protect her family. However, after thorough search of the property, cops never found a weapon nor any blood or evidence of an animal killing, hence concluding that the whole story was made up.

Sharing her side of the story, Jenelle tells The Hollywood Gossip that the police lied about many things. "I never made a report against David in the first place," she claims. "The cops called me and left me voicemail asking me to call them back about the 'dog incident.' "

The 27-year-old said it was the police who first suspected it was a publicity stunt, but she allegedly told them, " 'Yes, what you heard is true about my dog. This isn't a publicity stunt and I'm not sure where my dog is or what happened to my dog but you would have to call David and ask. I was inside my house with my kids when David went outside with the dog.' "

She went on detailing what happened that day, "I told them I hear gunshots all the time at my house and my neighbor down the road even shoots his cannon sometimes. Told them I don't remember if I heard a gunshot or not. I never saw anything and was in the house with my kids the entire time (Ensley, Kaiser, and Maryssa.)"

Maryssa is David's daughter and Jenelle's stepdaughter. Jenelle said, "Maryssa even got on stand in court, with the CPS case, and testified that the story of the dog did in fact happen. Not sure why the police would lie about this entire investigation."

Jenelle went on accusing police of using this case for their own publicity. "These police ended their 'investigation' a month ago and told David’s lawyer, Bill Gore, that they were closing the case. I honestly think they are doing this for their own publicity because they could have wrote up their 'press release' weeks ago," she argued, adding that she felt "very attacked and exploited for no reason."