Celine Dion Gets Everyone Nostalgic With 'Titanic' Necklace in Paris

Going casual in a white T-shirt, a gray blazer and a mini black skirt, the 'My Heart Will Go On' songstress adds a touch of glamor with the iconic blue diamond necklace.

AceShowbiz - Celine Dion never fails to stun everyone with her styles during Paris Haute Couture Fashion Week. Stepping out in the City of Love on Wednesday, July 3, the 51-year-old singer made another memorable presence with her jaw-dropping accessory.

The Canadian star wore a white T-shirt which read, "I love Paris," with the name "Hilton" written underneath, seemingly referring to socialite and hotel heir Paris Hilton. She teamed it with a gray blazer which was draped over her shoulders and a mini black skirt. She also wore black pumps and stylish shades, while carrying a black handbag.

But it was her blue diamond necklace which stood out the most. The huge sparkler is a costume replica of the Heart of the Ocean, which was famously worn by Kate Winslet's Rose DeWitt Bukater in 1997's "Titanic". 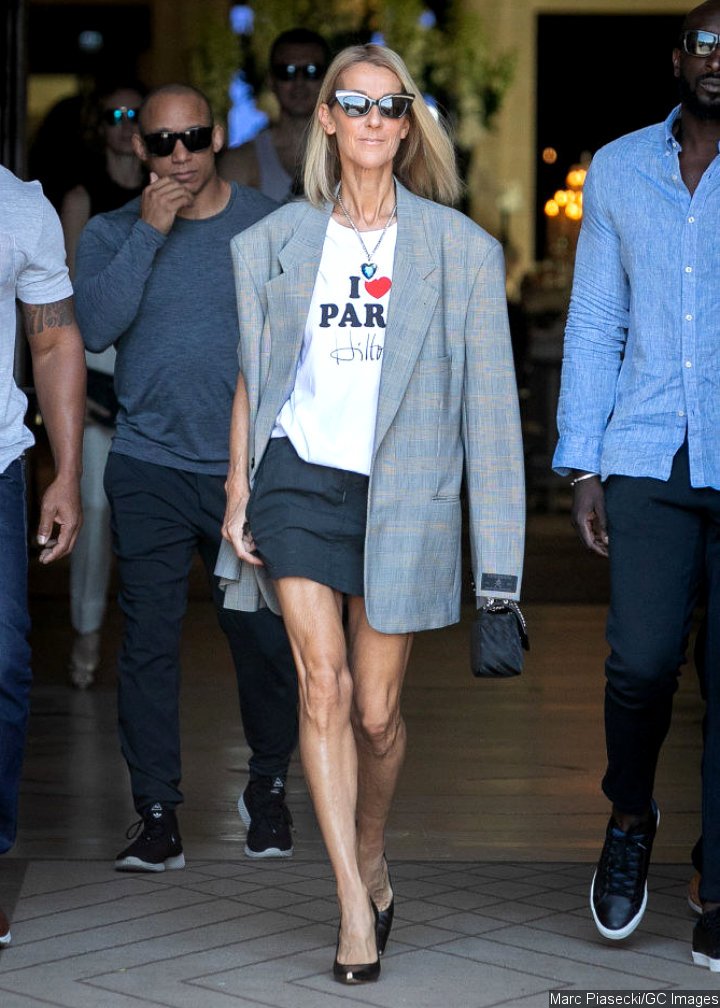 Celine Dion steps out in Paris with a Heart of the Ocean replica.
See also...

Celine's style that day was a copy of a model's look at the Vetements Menswear Spring-Summer 2020 show in Paris last month. The said model walked the runway in the same Paris Hilton-inspired outfit, necklace, white shirt and all.

Celine sang the hit soundtrack "My Heart Will Go On" for the James Cameron-directed movie. She previously wore a 171-carat Heart of the Ocean replica at the 1998 Academy Awards, during which she performed the ballad. In 2016, she also paid a tribute to the romantic movie with her look as she sported an oversize Jack and Rose hoodie, also from Vetements, with a price tag of $885.

The pop diva has been in Paris to attend a number of fashion shows during Paris Haute Couture Fashion Week that will run until Thursday, July 4.

Celine recently wrapped up her nearly eight-year residency in Las Vegas, which began in March 2011 and ended on June 8. She grossed a total of $272.3 million from the shows. She is next scheduled to embark on a concert tour in support of her upcoming album "Courage", which is set to be released in November. The tour will kick off in Quebec City, Canada on September 18 and continue until April 2020.