AceShowbiz - Duane Chapman a.k.a. Dog the Bounty Hunter has shared a new picture of his wife Beth Chapman from the hospital. The 66-year-old bounty hunter, who has been staying by her side since her latest hospitalization, posted on Twitter on Monday, June 24 a photo of Beth's hand.

In the image, Beth's hand is hooked to an IV as it's resting on the hospital bed. Dog tried to keep his post positive though and highlighted his wife's beautiful manicured nails, which are decorated with nail jewels. "You all know how she is about HER NAILS !!" he captioned it. 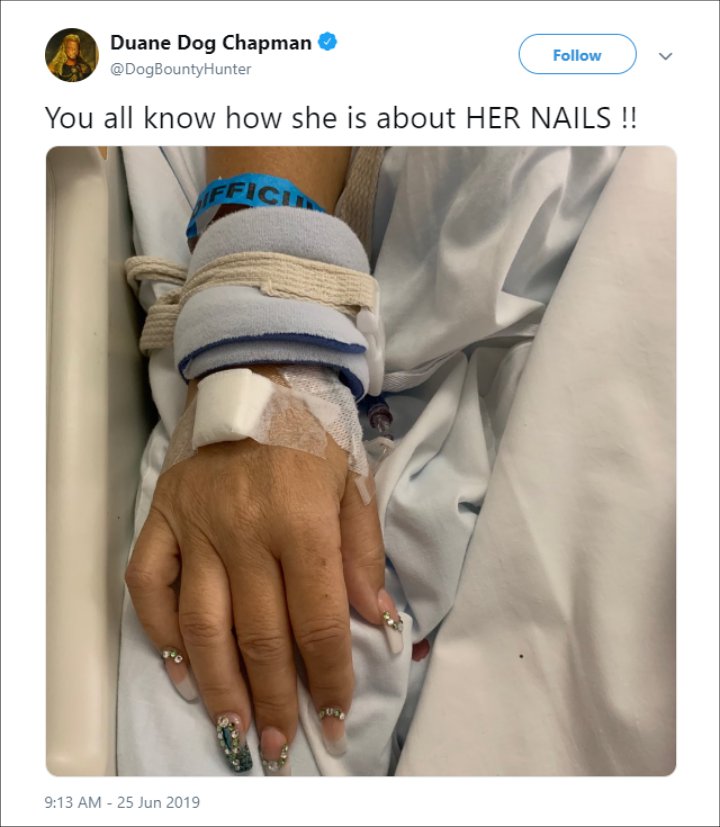 An agreed fan replied to his post, "Shes always a classy lady. I admire her so much. Strong and beautiful. Sending love your way Beth!" Another wrote, "Nails full of bling and her heart is full of bling! Bless you Beth!"

Beth was rushed to a hospital on Saturday morning, June 22 due to a breathing issue resulting from her throat cancer. A 911 call made from Beth and Dog's residence in Honolulu, Hawaii described her situation as a "choking" emergency.

Beth has been placed in a medically induced coma for two days now. Dog took to Twitter on Sunday to ask fans for prayers for his wife, writing, "Please say your prayers for Beth right now thank you love you."

TMZ reports that Beth is placed in a coma out of necessity, because medical staffers found it incredibly difficult to treat her. Sources say she was in a lot of pain and required oxygen when she arrived at the hospital, but when doctors tried to treat her, Beth began yanking out the lines doctors were using to give her fluids and medications. They put her under a mild sedation, but that wasn't enough and she was still agitated. So they decided to place her in the medically induced coma.