Meanwhile, Princess Love flips the bird after the 'Shazam!' actor says that her husband is more known for 'his work as a cameraman,' clearly referring to his infamous sex tape with Kim Kardashian.

AceShowbiz - Knowing that Ray J was in attendance at the 2019 MTV Movie and TV Awards at Barker Hangar in Santa Monica, California, host Zachary Levi couldn't resist the temptation to take a jab at the rapper during his opening monologue. After praising Sandra Bullock, the "Shazam!" actor lightheartedly shaded Ray J over his infamous sex tape with Kim Kardashian.

Calling the "Love & Hip Hop: Hollywood" star "America's other sweetheart," Zachary said, "Although I'm sure some of you are more familiar with his work as a cameraman. I had to, I'm sorry. It was delectably a great idea." The camera then panned to show Ray J, who looked really awkward after hearing the joke. Meanwhile, his wife Princess Love flipped the bird to the camera.

While the couple didn't seem too pleased with the joke, social media users were laughing over it. "Did not have to shade Ray J like that," one Twitter user wrote, as another noted that Ray J's "energy changed SO FAST with that one." One other said, "Zach Levi just f***ing roasted ray j saying he's well known for being a cameraman then his wife flipped off the camera I can't breathe." 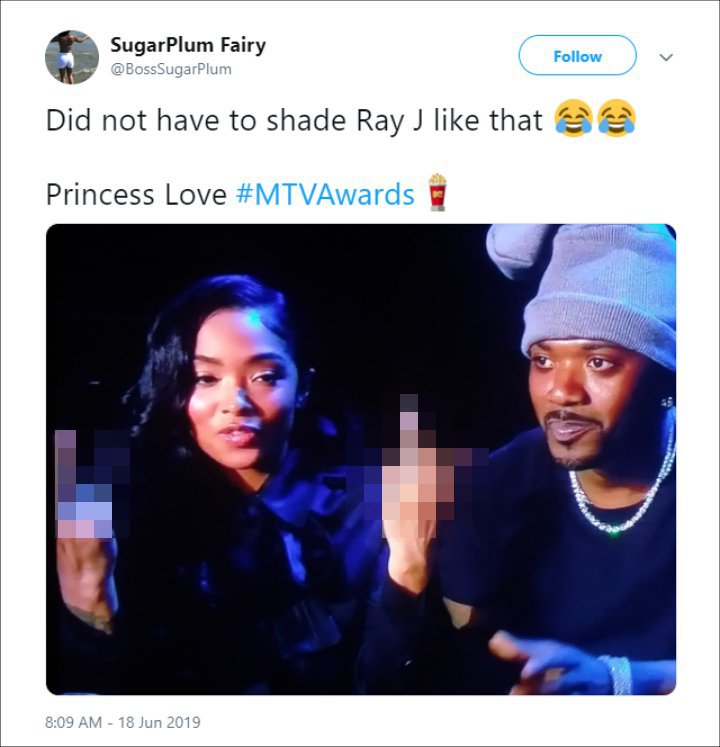 One social media user reacted to Zachary Levi's shade at the 2019 MTV Movie and TV Awards.

Some others, meanwhile, didn't take the joke well. "Idk who this host of the VMAs is but he made a Kim Kardashian sex tape joke to Ray J right in front of his wife who he has a child with. How rude," someone said. One individual blasted Zachary, "This host is not funny at all and his dry a** Ray J joke was stale asf and tacky."

Ray J and Kim made headlines in 2007 when the sex tape that they made years prior was leaked online. Kim has spoken up about it in multiple occasion, including her own show "Keeping Up with the Kardashians". She said in a November 2018 episode of the E! show, "Everyone knows it. My jaw was shaking. I definitely went through a wild phase."

Ray J Spotted With Mystery Woman Amid Princess Love Marriage Drama - Is She His Side Chick?