Donald Trump Gets Trolled After Liking Tweet About Rihanna

People are confused and some ask the President to 'stay away' from the Barbadian singer after he clicked the 'like' button for the first time in more than a year for a tweet about Rihanna's chat in Interview Magazine.

AceShowbiz - Donald Trump, who is picky with his Twitter "likes," apparently has a soft spot for Rihanna. The president has surprised fellow social media users with his recent activity after he liked a tweet about the "Umbrella" hitmaker.

On Monday, June 10, writer Heben Nigatu shared a screengrab of the 31-year-old singer's chat in Interview Magazine. "Every new Rihanna interview makes me grow stronger. We stan a work/life balance queen!!!" she wrote in the caption.

In the interview, Rihanna talked about how she's balancing her business ventures with "personal days." "I never used to be this way. It's only the last couple years that I started to realize that you need to make time for yourself, because your mental health depends on it," she told her "Ocean's 8" co-star Sarah Paulson for the summer 2019 issue of the magazine.

She went on sharing, "I've made little things a big deal, like going for a walk or going to the grocery store. I got into a new relationship, and it matters to me. It was like, 'I need to make time for this.' Just like I nurture my businesses, I need to nurture this as well. I'll shut things down for two days, three days at a time. On my calendar we now have the infamous 'P,' which means personal days. This is a new thing." 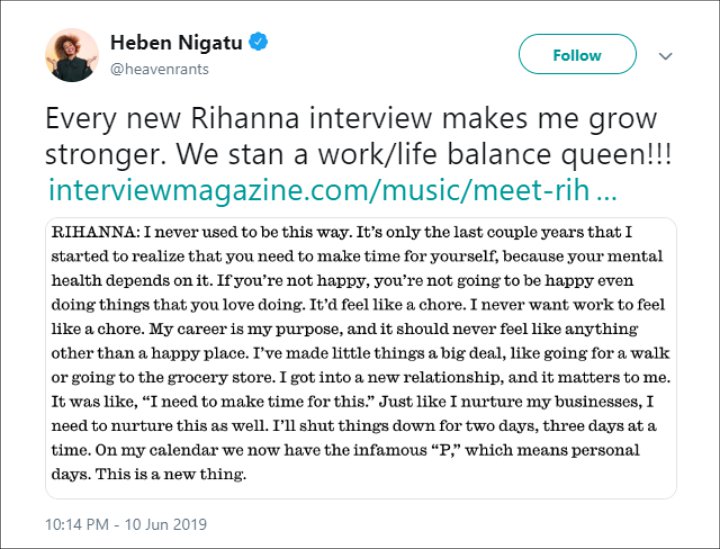 Surprisingly, President Trump clicked the "like" button for the tweet, marking the first time he ever did it in one and a half year. It's also only the eighth tweet that POTUS has ever liked on the social media platform.

Shocked that the President liked her tweet, Nigatu tweeted on Wednesday, "WHAT IS HAPPENING."

The writer is confused after Trump liked her tweet.

Others were equally confused, with one writing, "?!?!?!?!?!?!?!?! This is insane!" Another commented, "I literally don’t know how to react to this," while there were some who expressed their feelings with memes.

Some people started to make fun of Trump liking the tweet. "Wondering if someone else snagged his phone for a bit," one mused. Another speculated, "maybe he saw that she was named the world's richest musician and he was like 'I'd like to learn how to make money as well'."

Someone else quipped, "Which @fentybeauty foundation shade do you think is his favorite?" Another comment read, "So is this Trumps attempt to reach another portion of America? Watch out folks, wolf in sheep's clothing. Then again he might be an uber Rihanna fan."

"Donald Trump read this Rihanna quote advising people to 'make time for yourself' and 'shut things down for two days, three days at a time' to 'nurture' yourself, and saw it as validation for watching Fox News all day every day," another dissed the President. Meanwhile, one Rihanna fan wasn't impressed and wrote, "The last time Trump liked a tweet before Rihanna was in 2017.... omg GET A JOB, STAY AWAY FROM HER."