In a powerful Twitter post, the 'Younger Now' singer says that regardless of what a woman is wearing or doing, it is never acceptable to touch her without consent.

AceShowbiz - Miley Cyrus has broken her silence after a terrifying experience during which an overzealous fan forcibly grabbed her and tried to kiss her without her consent. In a powerful statement posted on Twitter on Tuesday, May 4, the 26-year-old singer reacted to Internet trolls who commented that she "asked for it" by the way she dressed.

She added the hashtag #DontF**kWithMyFreedom. She also posted a video of the incident and a clip from "The Talk", on which co-hosts Sara Gilbert and Sheryl Underwood defended Miley against haters who blamed her for the groping incident.

In another post, Miley shared a screengrab of comments from some social media users who said she deserved to be grabbed because of her desire to feel "sexy" and "dress like a w***e." She captioned it, "Don't f**k with my freedom. #stillnotaskingforit." 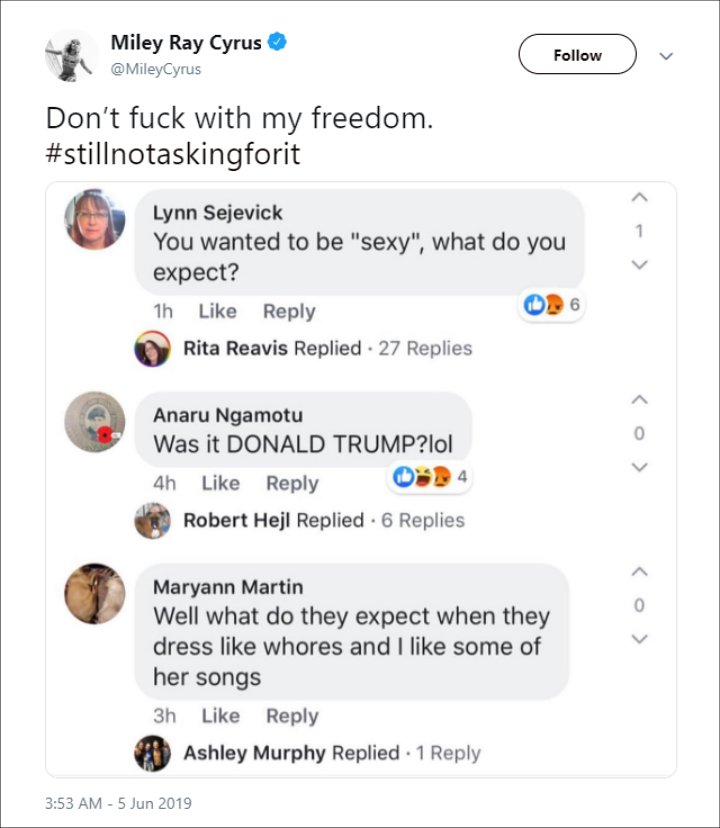 Miley Cyrus reacts to Internet trolls who blame her for groping incident.

On Sunday, a video surfaced online showing a man getting to aggressive with Miley. The "Malibu" songstress was navigating a throng of fans in Barcelona, Spain with her husband Liam Hemsworth walking in front of her when the overzealous fan grabbed the star's hair and shoulder, and attempted to plant a kiss on the singer, who recoiled.

The couple's security team then put themselves between Miley and the fan, and ushered her away into her vehicle, while Liam put a protective arm around his wife. No arrest was made in the incident, but many of Miley's fans were outraged by the man's action, calling it "disgusting."

The "Wrecking Ball" hitmaker was in the city to perform at the Primavera Sound festival on Friday, May 31.

Miley Cyrus Gets Racy in New Photos With Cody Simpson