Hours before posting the denial, the 'Breakaway' hitmaker makes use of Twitter to express her annoyance at people who were setting up fake accounts and posing as her on social media.

The "Breakaway" singer has been sporting a more svelte figure in recent weeks, with fans beginning to speculate about just how the mother of two has shed the pounds.

However, Kelly shut down rumours suggesting she took pills to help her slim down in a post on her Twitter page on Thursday, May 16, in which she wrote: "Other fake news that's going around about me is that I've been taking weird pills 4 weight loss or doing weird fad diets. All of this is not true. I ain't got time 4 all that. I eat the same stuff I always have. It's all just made w/different flours/sugars/ingredients (sic)". 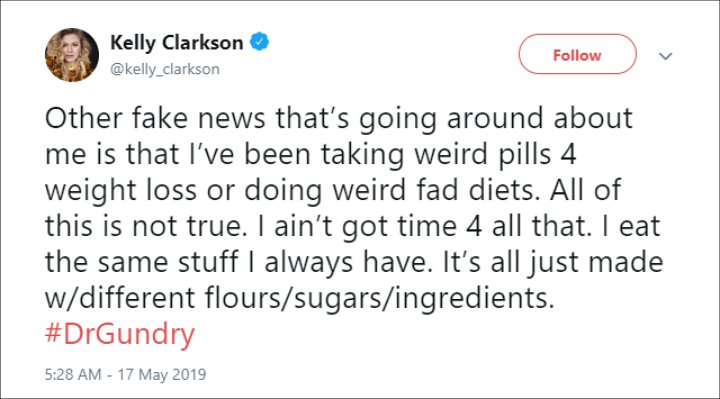 She concluded her post by referencing author Dr. Steven Gundry, whose books include "The Plant Paradox: The Hidden Dangers in 'Healthy' Foods That Cause Disease and Weight Gain".

Earlier, Kelly had also hit back at people who were setting up fake accounts and posing as her on social media. She'd been alerted to the fact an account had been set up which claimed to be the singer's special way of communicating with her fans, with one of her followers sharing a message she'd received from the false account and writing: "Someone made this fake account and is trying to lie to me I don't believe that because I know the real Kelly Clarkson account and it making me mad now".

Kelly then responded: "This is fake news & not me. What is wrong with people? I mean, I’m way too busy to be sitting around creating fake accounts. 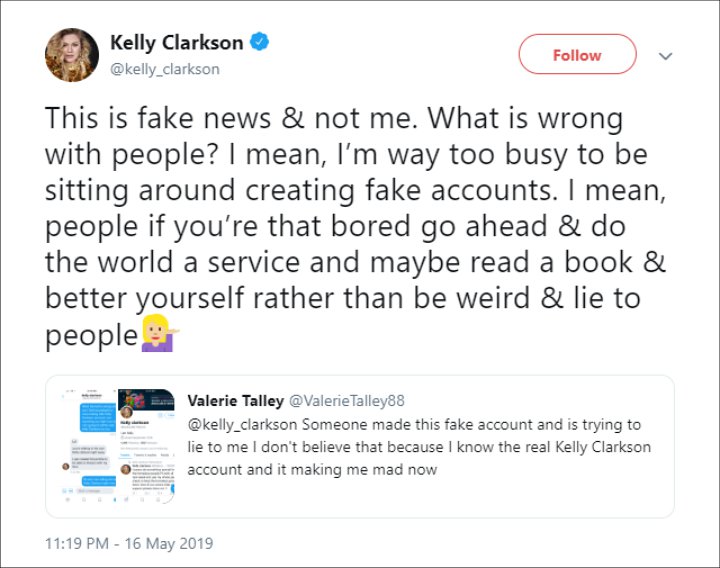 The singer also sets the records straight about fake accounts made under her name.

"If you're that bored go ahead & do the world a service and maybe read a book & better yourself rather than be weird & lie to people".

BET Awards 2019: Cardi B and Drake Lead With Multiple Nominations