The former star of 'Daredevil' TV series flaunts the stunning sparkler on her ring finger when she speaks at the NBC Upfronts presentation, sparking speculation that she's set to tie the knot with the U.S. Senator.

AceShowbiz - Rosario Dawson may be ready to tie the knot with Cory Booker, less than two months after confirming their relationship. The actress sparked rumor that she has got engaged to her boyfriend as she debuted a new diamond ring.

The 40-year-old beauty flaunted the massive sparkler that she wore on the ring finger when she spoke at the NBC Upfronts presentation on Monday, May 13. Wearing a white top under a blue blazer and matching pants, she undeliberately drew attention to her left hand. 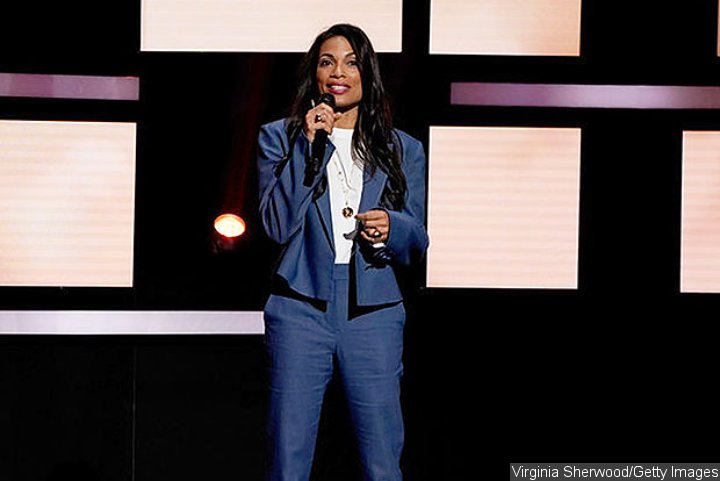 It's not clear if the diamond ring is a symbol of union for the couple or just a new accessory. Reps for both Rosario and Cory have not responded to requests for comment on the engagement rumor.

The pair confirmed they're an item in March, two months after their dating reports first emerged in January. They were first seen together during a movie date at the Regal Union Square in New York early of that month and was spotted attending the "Dear Evan Hanson" Broadway show a few days later.

"He's a wonderful human being and it's good to spend some time together when we can," Rosario gushed about her boyfriend when asked about the dating reports. "We're very busy... I am just grateful to be with someone that I respect and love and admire so much, who is so brilliant and kind and caring and loving."

Meanwhile, the former Mayor of Newark, New Jersey told Ellen DeGeneres on her talk show, "As our relationship grows it's difficult (dating in the public eye), but she is such a deeply soulful person." He continued, "She has taught me a lot of lessons about love already. Sometimes, you show the greatest strength when you make yourself vulnerable. She really has this nurturing spirit that has made me more courageous not just in the love that I project and want to see in our country, but I think in our own personal relationships to love more fearlessly. I'm very, very blessed to be with somebody that makes me a better person."

'Empire' Will End After 'Epic' Season 6, Has No Plans for Jussie Smollett's Return