While the two WWE stars share advice about moving on from past relationship, their followers couldn't help but notice that the exes seem to take a dig at each other.

AceShowbiz - Nikki Bella and John Cena, who have kept their relationship civil after splitting up last year, may not be that friendly anymore. While they're not publicly calling out each other, the former couple seemed to subtly trade jabs on Twitter.

It began with John's cryptic post on Monday, May 6 which read, "Beware those who think you owe them happiness at the expense of your own well being."

Nikki didn't directly reply to John's tweet, but she also posted about happiness on her own account a day later. "When you don't give him what he wants, he will delete you, silence you, manipulate you, do what he can to destroy you, but turn that hurt into strength. Take the high road and prevail! Happiness can't be bought, it is priceless. It's your true secret weapon. N," she wrote on Tuesday. 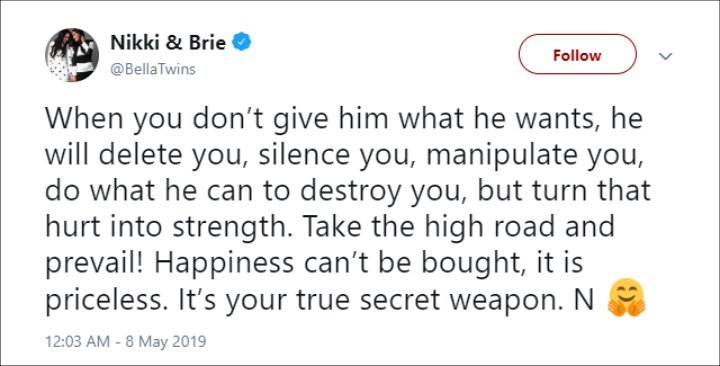 Is this Nikki Bella's response to John's cryptic post?

While John's and Nikki's tweets sounded like mere advice to their followers, some couldn't help but notice that their words seemed to derive from their experience of their failed relationship. "Is it really necessary to have these 'cryptic' tweets about each other Nikki? John does them too... Just move on and be happy period!!!" one commented on Nikki's post.

Another took Nikki's side, "Just remember John's strict voice calling all the shots etc kids, house rules etc! You're a free spirit Nikki! You don't ever need that in your life again!!" Someone else blasted John for not being good enough as a boyfriend to Nikki during their relationship, "John probably shouldn't have treated her like a child and probably should have been more supportive. He seemed to not be showing up at her thing."

Another suggested that Nikki should ignore John, "Agree with you! But please don't lower youself (sic) to his level & follow his petty passive aggressive games (we ain't stupid we know you two unfollowed each other) Just ignore him, and keep being happy. Remember what you said in your last podcast: there's power to silence. Love u."

Nikki and John have moved on since their split, with the former dating "Dancing with the Stars" pro-dancer Artem Chigvintsev, and the latter romancing tech savvy Shay Shariatzadeh. Speaking of her ex's new relationship, Nikki said in April, "I'm very happy for him. As long as John is happy, I'm happy."

Nikki Bella and Artem Chigvintsev Arguing Over Their Baby's Name