Is This the First Set Photo From Scarlett Johansson's Black Widow Movie?

The upcoming Marvel film, which centers on Johansson's 'Avengers' character, has reportedly begun production in Black Park, near Pinewood Studios in England.

AceShowbiz - Black Widow's story will continue in a standalone movie despite the character's obvious fate in "Avengers: Endgame". While Scarlett Johansson has been coy when asked about her solo movie, it seems that it won't be too long before fans get to see her back in action.

A Twitter user with the handler @mistermygo recently shared a picture from what it's claimed to be the set of the upcoming Black Widow movie, suggesting that the production has begun. The photo was taken in Black Park, near Pinewood Studios in Buckinghamshire, England.

"I don't follow the #Marvel movies at all, but they're filming the upcoming Scarlett Johansson thing in Black Park (next to Pinewood Studios)," so the Twitter user wrote in the caption. The photo doesn't show any actors or crew members in the park, but there were some stuff that looked like filming equipments.

The Twitter user pointed out that there's "some 'Central Park' signage" in the park, meaning that the park stands in as the Manhattan park, which is located between the Upper West Side and Upper East Side in New York City. 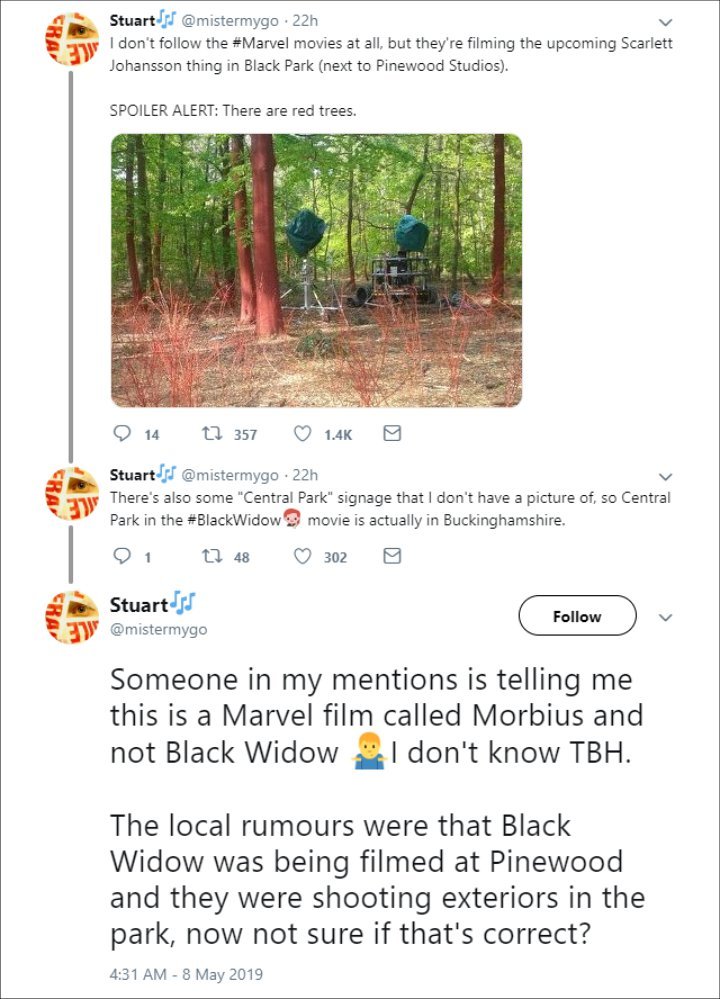 The person who uploaded the photo later updated the post with a dispute from another social media user, who claimed that it's the set of another movie called "Morbius". "Someone in my mentions is telling me this is a Marvel film called Morbius and not Black Widow. I don't know TBH," he/she added, before sharing the conflicting info from local people, "The local rumours were that Black Widow was being filmed at Pinewood and they were shooting exteriors in the park, now not sure if that's correct?"

"Black Widow" will focus on Johansson's Natasha Romanoff, a Russian spy and assassin who later defects to the United States and becomes an agent of S.H.I.E.L.D. and Avenger. It will likely serve as a prequel to the "Avengers" movies.

Florence Pugh, Rachel Weisz and David Harbour have been rumored to be joining the cast. Cate Shortland is on board to direct, while Jac Schaeffer ("The Hustle") has been hired to pen the script. Disney reportedly eyes a 2020 release for the solo movie.

Tamera Mowry Still in 'Pain' Over Niece's Death in California Shooting: 'Missing You Every Day'

Scarlett Johansson Hopes 'Black Widow' Could Give Fans 'Some Resolution'