The cookbook author is quick to clap back at the FOX News anchor after the latter says during her program that Chrissy doesn't deserve a spot on the annual list.

AceShowbiz - Chrissy Teigen has taken a spot on Time's 100 Most Influential People in the World list this year, and one particular person is not that happy about it. FOX News anchor Laura Ingraham raged about it in the early hours of Thursday morning, April 18, and the supermodel was clearly not having it as she was quick to fire back.

"She was chosen according to the profile because, quote: '…all her life, Chrissy Teigen has liked to eat. She's not shy about that or anything else really,' " Laura said during her program. "Well that's nice and innovative I guess, eating. But did most Americans like her take on female empowerment during last week's Democrat retreat?"

Laura then cut to a clip of Chrissy responding to a question about which words she thought women should use more often. Answering the question, the "Lip Sync Battle" co-host said, "F**k you." Laura looked shocked watching the clip before responding, "Well. OK then."

The clip made rounds on social media, so it naturally didn't take too long for Chrissy to notice it. "Corny monster. There were 1 million other ways to try and take me down and this is what you choose? F**k you," she responded on Twitter, along with a smiling emoji. 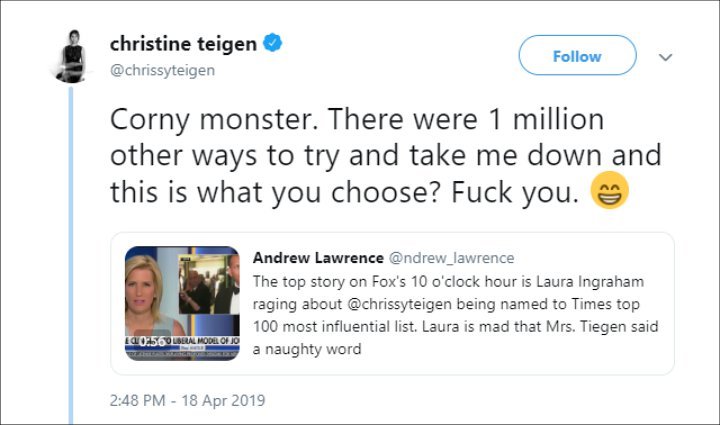 She later added in another tweet, "When time comes out with their 100 most influential white supremacists list, I promise I won't question your worthiness," before following it up with a GIF of the Laura addressing the crowd at the 2016 Republican National Convention. Many found her gesture at the time to be eerily similar to a Nazi Sieg Heil salute. 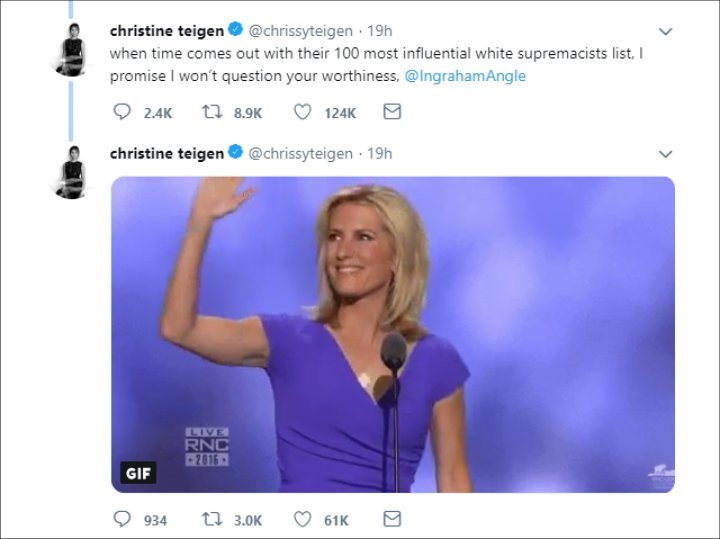 Chrissy Teigen called Laura Ingaraham "white supremacist" as she continued to diss her.

Laura has yet to reply to the clapback.

It should be noted this isn't the first time Laura has irked famous celebrities. Prior to this, many rappers have urged FOX to fire the disgraced anchor after she took aim at Nipsey Hussle for "releasing" a track that took aim at President Donald Trump a day after his memorial service. The latest star to hit back at Laura was Justin Bieber, who said, "Laura Ingraham absolutely disgusting what you did on national television. How dare you laugh in the face of a person who has passed on. Doesn't matter who it is."

"Disrespecting someone's who was a pillar in the community and did right by people (sic)?" he continued. "Did you not think about the family who just lost a love one (sic) and no have to see you mock him on national television. It's absurd and you should be fired period."

Chrissy Teigen Shuts Down Hater Accusing Her of Having 'Bald' Hair