Having to cut short his appearance after being left 'blinded and disoriented' by the bright flashing lights, the 'Baby Blue' rapper assures he is feeling better and vows to never use them again.

AceShowbiz - Rapper Action Bronson had to cut short a show in Canada on Monday, April 15 after he was "blinded and disoriented" by a strobe light.

The "Baby Blue" star was walking towards the back of the stage at the Algonquin Commons Theatre in Ottawa when one of the bright flashing lights was pointed directly in his face, causing the MC to immediately cover his eyes and stumble backwards.

As his collaborator Meyhem Lauren continued with the performance, he briefly walked off the platform before returning to play another song, and admitted he could barely see.

"I gotta wait for these motherf**kers (medics) to come check my eyes 'cause I can't see s**t," Bronson told the crowd. "I'm seeing stars right now...".

He completed the track and was seen by paramedics, but required further treatment at a local hospital, forcing venue officials to end the show early.

On Tuesday afternoon, Bronson took to Twitter to update fans about his condition.

"I WAS BLINDED AND DISORIENTED FROM THAT BLAST OF THE STROBE LIGHT LAST NIGHT THATS (sic) WHY I WAS UNABLE TO FINISH IN OTTAWA," he wrote. "IM FEELING BETTER NOW THANK YOU (sic)."

However, he has no interest in performing with strobe lighting ever again: "THOSE THINGS NEED TO NEVER BE NEAR ME AGAIN IT WAS ALMOST REALLY BAD (sic)," he wrote. "BE CAREFUL." 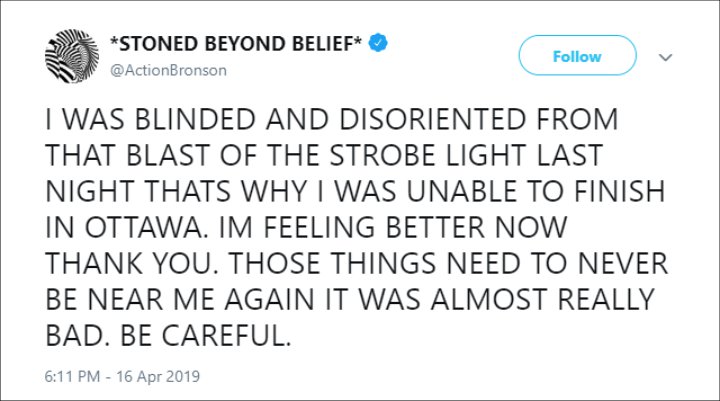 Action Bronson took to Twitter to update fans about his condition

Bronson has a few days to recover from the incident as he is not due back onstage until Saturday, when he will perform at the National Cannabis Festival in Washington, D.C.