The adorable yellow Pokemon apparently loses his memories, but refuses to give up on searching for his human partner's missing father.

AceShowbiz - As teased by Ryan Reynolds and Warner Bros. Pictures in the previously-released featurette, the new trailer for "Pokemon Detective Pikachu" arrived online on Tuesday, February 26. The video shares more of the titular character's backstory and focuses on Pikachu and his human sidekick Tim Goodman's (Justice Smith) attempt to find the latter's missing father.

Pikachu reveals to Tim that one day he woke up "with a heavy case of amnesia in the middle of nowhere" and the only clue to his past is a hat with the name and address of Tim's father Harry Goodman. The caffeine-addicted yellow Pokemon then embarks on an investigative journey with his human partner to search for Tim's father.

"Harry is still alive," Pikachu insists, "Case closed. But still open until I solve it." He then shares his ridiculous theories, "Harry faked his own death. Or...somebody else faked Harry's death. Or Harry faked somebody else's death." He added though, "That last one doesn't work at all."

Their investigation brings them to a battle ring, where Pikachu attempts to use Thunderbolt to strike his enemy, a Charizard, but he can't summon his power because of stage fright. "I can't do it when people are watching," he admits. Cornered, he then shows his other effective weapon, his adorable "Pika Pika."

Like the first trailer, the new one features glimpses of other "Pokemon" characters, namely Psyduck, Blastoise, Ludicolo, Golurk, Snorlax, Machamp, Loudred, a gang of Gengars, Mewtwo and many others.

According to the official synopsis, the story begins when ace private eye Harry Goodman goes mysteriously missing, prompting his 21-year-old son Tim to find out what happened. Aiding in the investigation is Harry's former Pokemon partner, Detective Pikachu: a hilariously wise-cracking, adorable super-sleuth who is a puzzlement even to himself.

Finding that they are uniquely equipped to communicate with one another, Tim and Pikachu join forces on a thrilling adventure to unravel the tangled mystery. Chasing clues together through the neon-lit streets of Ryme City-a sprawling, modern metropolis where humans and Pokemon live side by side in a hyper-realistic live-action world-they encounter a diverse cast of Pokemon characters and uncover a shocking plot that could destroy this peaceful co-existence and threaten the whole Pokemon universe.

The film also stars Bill Nighy, Kathryn Newton, Suki Waterhouse, Ken Watanabe and Rita Ora. Directed by Rob Letterman, it is set to be unleashed in theaters across the nation on May 10. 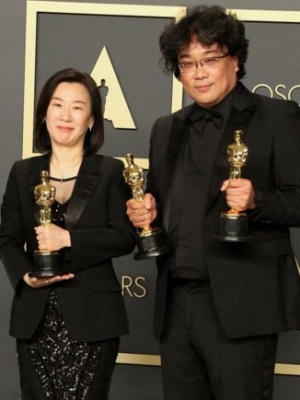