The 'Maleficent' actress takes four of her six kids, Shiloh, Zahara, Maddox and Pax, to the opening of MoMA's Doc Fortnight and the premiere of Prune Nourry's Serendipity exhibition in New York City.

AceShowbiz - Angelina Jolie and her kids made a rare official public appearance on Thursday night, February 21. The 43-year-old actress took four of her six children, Shiloh, Zahara, Maddox and Pax, to the opening of MoMA's Doc Fortnight and the premiere of Prune Nourry's Serendipity exhibition in New York City. Noticeably missing from the event were twins Knox and Vivienne.

The "Salt" actress looked stunning in a sparkly Givenchy jumpsuit paired with black stilettos. She also applied a red lipstick while her long hair was tied into a simple ponytail. Shiloh matched her mom in an all-black number.

Zahara was fashionably chic in a black-and-white midi dress with black boots. Maddox wore a black jacket on top of a white T-shirt and blue jeans, teamed with black shoes. As for Pax, he opted for comfort in a blue sweater, a long black coat and sneakers. 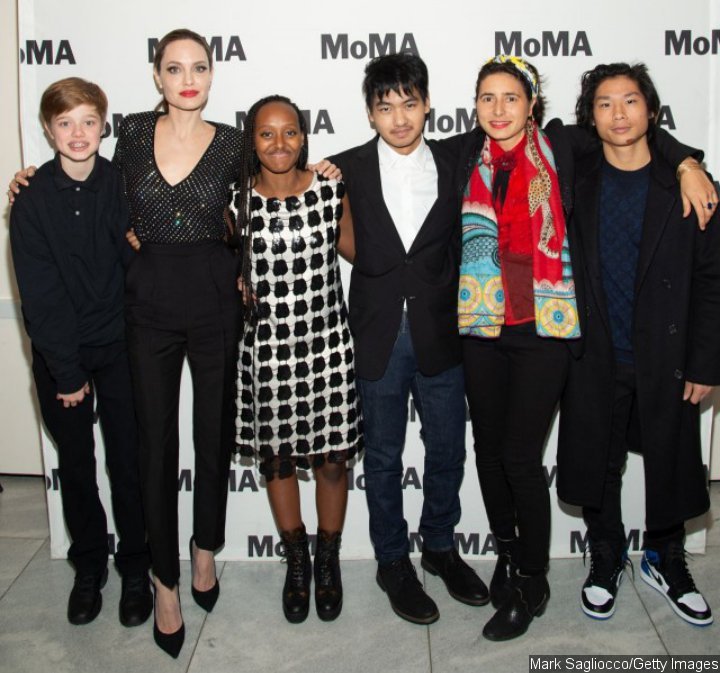 Angelina Jolie and her kids, Shiloh, Zahara, Maddox and Pax, posed for a group photo at the opening of MoMA's Doc Fortnight.

The fivesome posed with French artist Prune Nourry, who specializes in sculpture, and Rajendra Roy, Chief Curator of Film at MoMA. They appeared to have a fun night out, goofing around as they posed with fake eyeballs in one of the photos taken at the event. 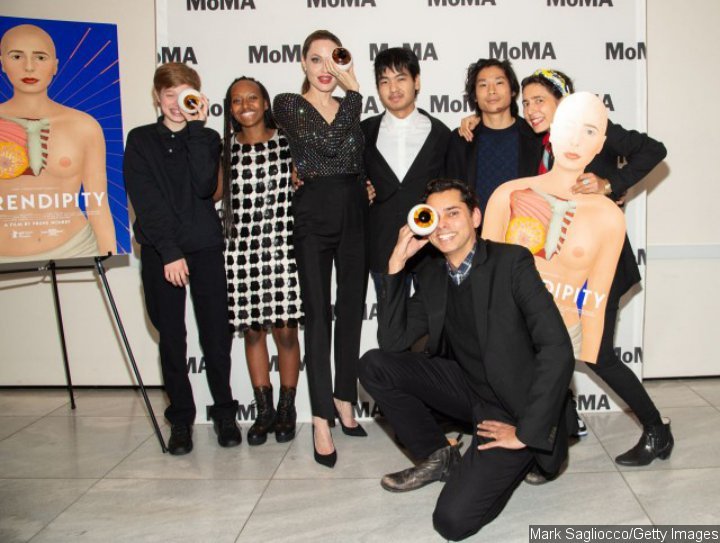 The fivesome goofed around with fake eyeballs while posing with French artist Prune Nourry and the museum's Chief Curator of Film, Rajendra Roy.

A day after their night out at the museum, Angelina took her eldest kid Maddox on a university tour in NYC. The "Maleficent" star cut an elegant look in a gray overcoat and round sunglasses while carrying a black Yves Saint Laurent handbag. Her 17-year-old son, meanwhile, bundled up in a blue hoodie, jacket and jeans, with white cap and matching sneakers.

While the kids have never been seen in public with their father Brad Pitt since the actor's split from Angelina in September 2016, the former spouses have reportedly agreed to split their time with the kids after reaching a custody agreement in late 2018.

Angelina's father Jon Voight recently talked about his daughter's relationship with her children. "She's a very invested mom. She's on it. She's on it with these kids. She gives them love every second of their day," the "Ray Donovan" star told Us Weekly at the 2019 Movieguide Awards in Hollywood earlier this month.

"She's very smart too. Smart girl. Brave. She's got all these great qualities," the 80-year-old actor added, "I pray for all the members of the family - Brad as well. Everybody's gonna be OK. That's it."

Amy Smart and More Round Out DC Universe's 'Stargirl' Cast