The 'Shallow' singer has just got two new tattoos, one of which includes a major mistake that fans quickly point out on Instagram.

AceShowbiz - Lady GaGa just debuted two new tattoos on Valentine's Day. The "Just Dance" singer posted on Instagram on Thursday, February 14 a photo each of her giant back tattoo and a musical note ink on her inner arm.

The back tattoo features a rose sprawling up her spinal cord with the words "la vie en rose." The tattoo is a tribute to her movie "A Star Is Born" as "La Vie En Rose" is the title of the song that her character Ally sings in the musical drama flick. French singer Edith Piaf originally sings the song.

"Happy Valentine's Day. A tattoo toast to 'la vie en rose' by the beautiful @winterstone my spinal cord is now a rose," so the 32-year-old singer captioned the picture that shows her bare back. She has also got an array of other tattoos on the left side of her back and shoulder.

Happy Valentine’s Day. A tattoo toast to “la vie en rose” by the beautiful @winterstone my spinal cord is now a rose

The other new tattoo that GaGa has just revealed is musical notes that spell her name "GAGA." But the original version of the tattoo featured a major error. It left out the top line of the staff, one of the horizontal lines seen on sheet music. With only four lines instead of five, the notes were incomprehensible. 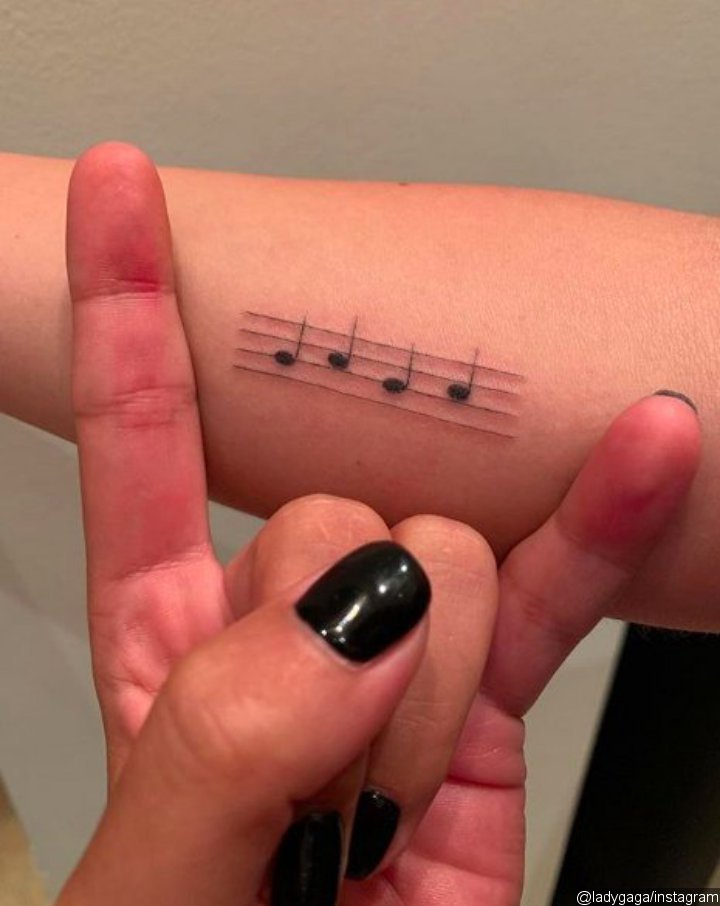 GaGa didn't realize the mistake until fans pointed it out in the comment section of her now-deleted post. Luckily, her tattoo artist Daniel Winter who gave her the new ink was apparently close by as she quickly fixed the error.

Within minutes, the Golden Globe-winning actress posted a new photo of the corrected tattoo, with an added top line. She blamed booze for the error, writing in the caption, "Musical crisis averted. Too many tequilas forgot the fifth staff line poor thing. Here's the real deal."

The singer/songwriter, whose real name is Stefani Joanne Angelina Germanotta, also laughed off the tattoo error in an Instagram video. "We're okay. The fifth staff is back," she was heard saying. "Sorry, music." She additionally wrote, "As a music theory student I'm appalled, as someone having fun with their friends I'm relieved."

As a music theory student I’m appalled, as someone having fun with their friends I’m relieved.🎼😂

GaGa, who has been making her rounds on award show, recently sparked speculation that she has called it quits with her fiance Christian Carino after making a solo appearance and ditching her engagement ring at the 2019 Grammy Awards. The talent agent accompanied the "Born This Way" hitmaker to previous award shows earlier this year.

While GaGa has not addressed the rumor, a source has assured fans that the star's engagement is still on. "She just wasn't wearing her ring due to performing," the source told E! News. "They have put all their wedding plans on hold until after GaGa's busy season, but still plan to get married this year."