The 'Horrible Bosses' actress looks beautiful in her white floral mini dress as she strolls the city's streets with the 'Grown Ups' actor.

AceShowbiz - Jennifer Aniston is currently filming her upcoming Netflix movie "Murder Mystery" with co-star Adam Sandler in Milan, Italy. The two actors were photographed walking hand-in-hand during the shooting of the mystery comedy film on the city's streets on Monday, August 27.

Looking beautiful as ever, Aniston wore a white floral mini dress, which she paired with soft gray wedges. Her blonde hair was arranged into a simple sleek ponytail. Sandler, who walked beside her, was seen donning a light blue Hawaiian shirt, dusty brown pants, navy shoes and a pair of dark sunglasses. He also sported a mustache. With that kind of style, the 51-year-old actor looked like a tourist on the film's set. 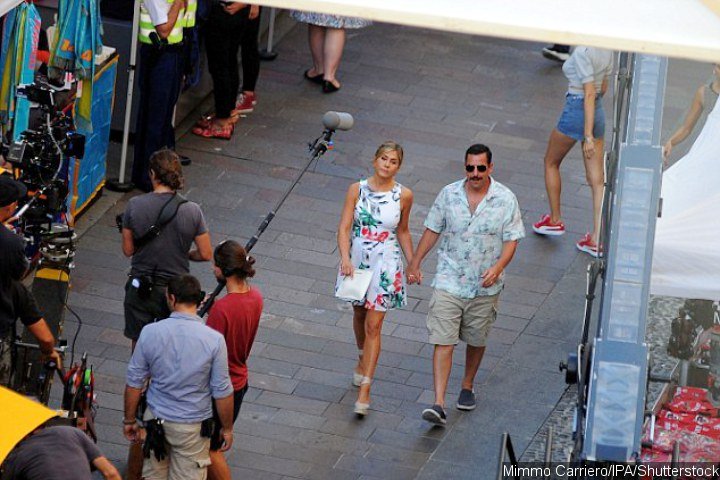 Aniston and Sandler looked like they had a great time in Italy. Before they started filming, the latter admitted that he loved the country. "I love Italy. I was here with my wife a year ago and loved it so much I brought the kids with me this time and an entire movie crew," the father of two said. "Great food, great people, great family life."

The former "Friends" actress and the "Grown Ups" actor will star in the Kyle Newacheck-directed movie alongside other well-known actors, including Luke Evans, Gemma Arterton and David Walliams. Sandler and Aniston will portray a marriage couple who goes for a long-promised European trip. The two then meet a mysterious man and they are invited to an intimate family gathering on the super yacht of an elderly billionaire. When the wealthy man is murdered, the couple becomes the prime suspects.

While Newacheck serves behind the lens, James Vanderbilt, whose credits include "Independence Day: Resurgence" and "The Amazing Spider-Man", serves as the screenwriter for the movie.

The film production began in Montreal, Canada last month as it is expected to premiere in 2019. It will mark Aniston and Sandler's second time working together. They previously starred in romantic comedy "Just Go with It" in 2011, playing a couple as well.

Jennifer Aniston: Adam Sandler and I Goofed Around on 'Murder Mystery' Set