The pair are pictured holding hands and sharing a laugh in their first sighting together since their romance reports surfaced in April.

AceShowbiz - Miranda Lambert and Evan Felker have been spotted together for the first time since their dating reports emerged in April. The couple was stepping out in public for a night out in New York City with their friends on Wednesday, July 18.

In a video obtained by Us Weekly, the 34-year-old country music singer and her 34-year-old boyfriend were seen holding hands after crossing the street. At one point, Evan leaned in to whisper something in Miranda's ear.

Being a protective boyfriend, Evan was also seen wrapping his arm around his girlfriend's shoulder while the group had a little conversation on the street. They were seen sharing a laugh as they sweetly gazed at each other.

Miranda looked lovely in a black mini dress with floral details that night. She carried a black hand bag and a denim jacket, and completed her look with black ankle boots. Her long blonde hair was styled in loose waves. 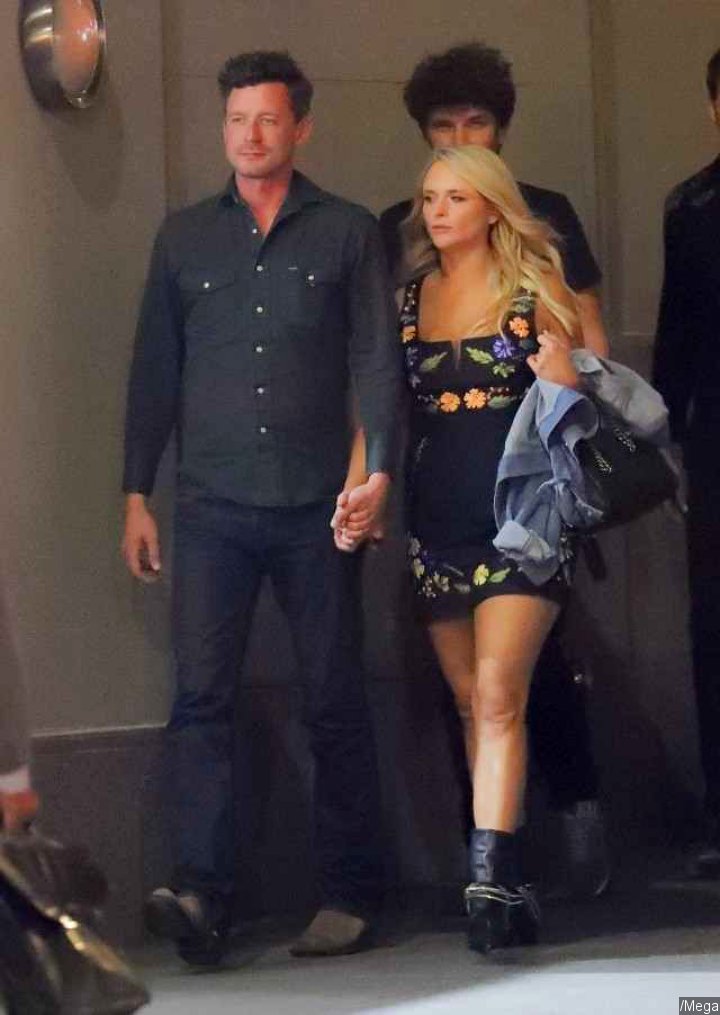 Miranda Lambert and boyfriend Evan Felker hold hands in their first sighting together.

"They looked very happy together. They looked closer as the night went on," a source tells Us. "At one point Evan leaned in for a kiss. When the two let themselves be open, they appeared very comfortable together."

Miranda and Evan started dating in April, shortly after the "Vice" singer split from her boyfriend of two years, Anderson East. They reportedly grew close as his band, the Turnpike Troubadours, supported Miranda on her "Livin' Like Hippies" Tour.

The news was even more shocking as it was revealed that Evan is still legally married to wife Staci Nelson. Although Evan filed for divorce in February, his estranged clearly had not moved on. She recently claimed that Evan called her earlier this month only to ditch her again when she was in the hospital.

"Aside from the ghosting and just very real #psychologicalwarfare and torture that happened earlier this year. A man that I perfected homemade chicken soup for when he was sick, cared for him through soooo many sweating miserable days coming off benders decided to come calling when I was happy last week," she posted on Instagram.

"Too happy. Riding and then at the beach with my girls. How dare I smile after all he did to try to break me?" she went on sharing. "I took those calls, because that's what a wife does. I'm still his wife."

"I've done everything to be a good one because deep down I thought it might change things. Less than a week later, I was sent to the hospital and couldn't reach him," Staci added. "That's not a real man. That's not a country boy and certainly no cowboy. Not a husband I'll ever take back because I was scared and he was gone. Again."

Said what I needed to say to those I needed to see it and archived the last post, because it doesn’t make me happy or serve me any longer. #movingforward #selfcare #smilingagain #ranchy

But she later removed the post and shared another post, claiming she has moved on. "Said what I needed to say to those I needed to see it and archived the last post, because it doesn't make me happy or serve me any longer," she wrote on Instagram, adding the hashtags "#movingforward #selfcare #smilingagain #ranchy."

Report: Rihanna Has Over 500 Songs Ready for Upcoming Dancehall Album

Miranda Lambert's Husband Retires From NYPD to Be Her Security Detail

Miranda Lambert Reveals How She Balances Her Celebrity and Marriage Life