AceShowbiz - Deadpool and Omaze team up for a good cause that is very close to him, a fight against cancer. The Merc with the Mouth is featured in a new video to announce the campaign that will benefit the work of F**k Cancer, the nonprofit dedicated to cancer prevention, early detection and providing support to those affected.

Ryan Reynolds slips into a pink Deadpool suit in the video, sitting on a couch while delivering "a very special message" to fans. "Oh! Hello there! You may be wondering, 'Why the pink suit?' Well, so the world can see that I have a big ol' heart-on-that's heart with a 't'-for my new obsession: Pink. (The color, not the pop singer.) Personally, I'm more of a Celine [Dion] kind of guy," he quips in the video. "Pink is tied like a beautiful ribbon to a cause very close to me: Cancer."

"I'm gonna donate the very suit off my back while giving you a chance to own some movie marketing memorabilia," he offers. "What you do from there is limited only by your imagination. Will you add it to your weekly wardrobe rotation? Does it become a colorful addition to your S&M dungeon? Or will you simply nail it to a post in order to scare away birds, children and the elderly?"

"This is one fight where everyone can be a hero. No superpowers, capes or lame CG costumes needed. Just your money," he adds, "Seriously, we need that. These suits are not cheap!" 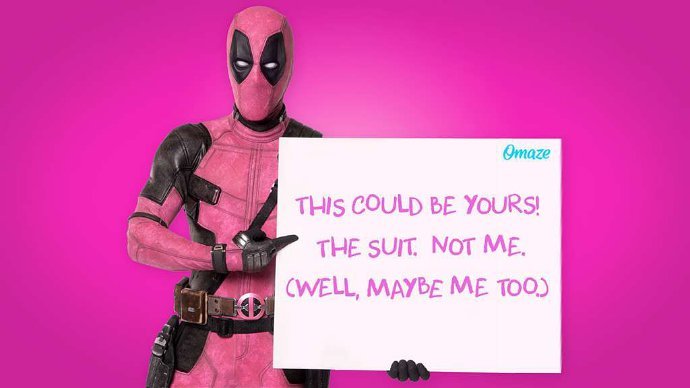 As to how fans can get a chance to win the suit, participants can donate anywhere from $10-$5,000. There are donation tiers, and different levels unlock exclusive merchandise, for example $10 gets 100 entries and $25 gets 250 entries. Donations of over $1,000 or more include other gifts, such as a signed movie poster or a personalized voicemail message recorded by Reynolds in character.

Reynolds is back as the mercenary in "Deadpool 2" which is set to arrive in the U.S. on May 18. Morena Baccarin returns as Vanessa, T.J. Miller reprises his role as Weasel, Leslie Uggams once again plays Blind Al, Brianna Hildebrand still portrays Negasonic Teenage Warhead, and Stefan Kapicic is back as the voice of Colossus. They are joined by Zazie Beetz who is cast as Domino, and Josh Brolin who is tapped to play Cable.