Despite feeling sad over losing a member, the remaining members decide to hold the Japan concert as scheduled because they want to keep their promise to fans.

AceShowbiz - After asking fans to wait for their decision, SHINee announced on Tuesday, January 9 that they would be holding their Japan concert as scheduled. The concert will mark the South Korean boyband's first concert since Jonghyun's sudden death in late last year.

SM Entertainment also released handwritten letters by Onew, Key, Minho and Taemin. Onew wrote that he felt thankful for the fans who "have protected and cared about the member that we love so much, and I'm sorry for worrying you."

He went on revealing that the members thought that they wouldn't be able to hold the concert. However, Jonghyun's mother "told us never to give up, and I believed that if we could give comfort to someone who is in longing and in pain, I should work harder even though I'm lacking. I am very lacking, but I want to do the best I can for SHINee. Even if the course is difficult, I will work my best."

"Jonghyun is forever a SHINee member, and will always be in our hearts and the fans' hearts, so I believe nothing will have changed," he continued. "I will continued to work hard as SHINee. Thank you." 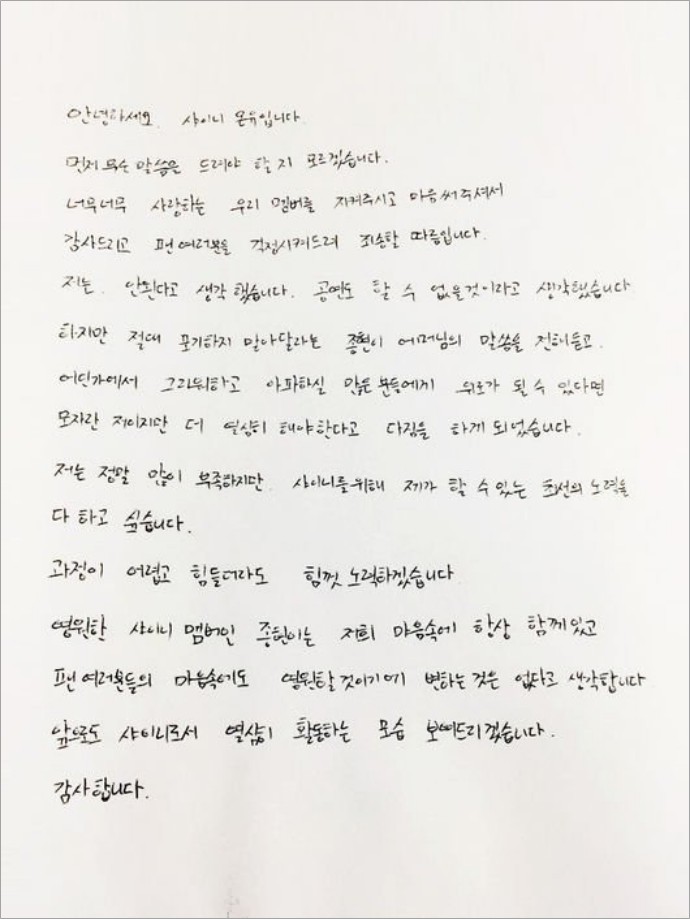 Key, on the other hand, revealed that he sometimes cried "when I see things Jonghyun-hyung left behind because of the memories," but he worked hard to get over it by thinking that he was spending time with Jonghyun. He continued, "Many people are worried about us, and we decided to continue on with our Japanese concert."

"This decision would be something Jonghyun-hyung wanted from us, and I believe that it's the most SHINee-like to keep our promise to the fans and put on a good stage," he added. "This year is SHINee's 10th anniversary. Thank you so much for always supporting us and taking care of us, and we will give back through a SHINee-like stage. I love you, and thank you." 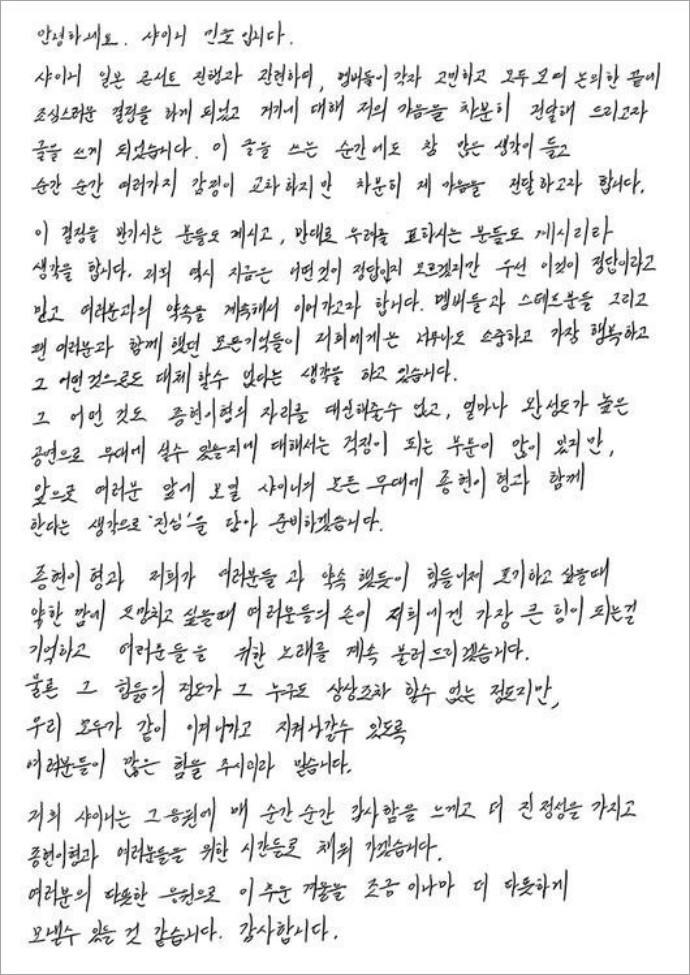 Meanwhile, Minho noted that he's worried over the quality of their upcoming concert, but he promised he would work hard for the fans. "As Jonghyun-hyung an the rest of us promised with you, when we are exhausted and want to quit, and when we want to run away because we're weak," he said. "I will remember that your hands are our biggest strength, and keep singing with you."

"It's harder than anyone can imagine, but I believe you will give us strength so we can all overcome this and keep our promise," Minho continued. "SHINee will feel grateful at every moment through that support, and fill our moments for you and Jonghyun-hyung. I think I will be able to be a little warmer in this cold winter thanks to your support." 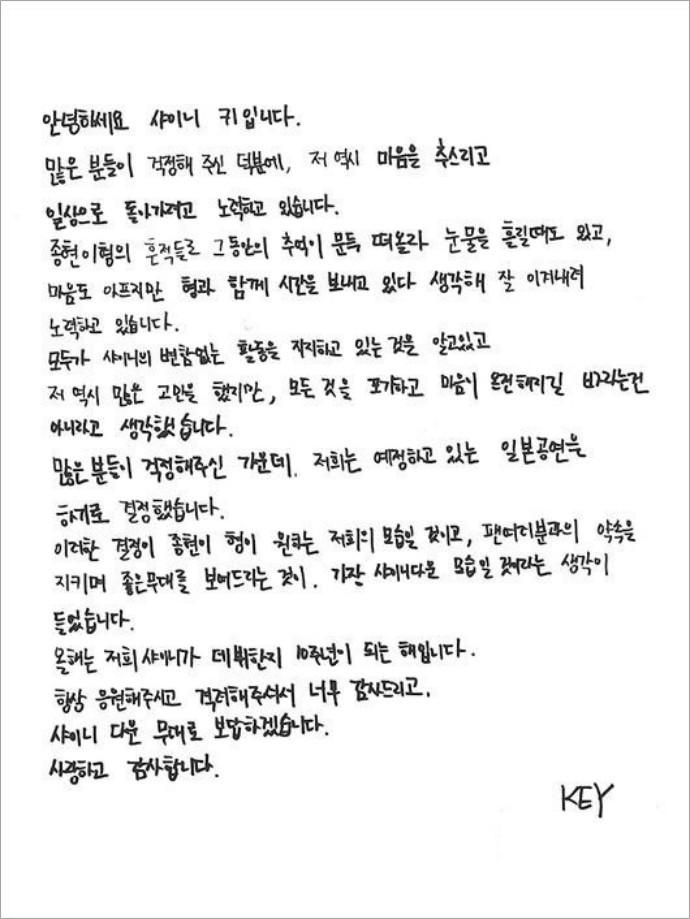 Lastly, Taemin shared that he didn't have confidence to perform after Jonghyun died, but he decided to join the concert because he wanted to "keep our promise with fans." He said, "When I looked back to the times when I was most at peace and happiest, it was when I was with members and fans. Thus, I had all the more affection for the name of SHINee and our team members, so I didn't want to give up even more."

"I know that the future won't be that easy, but I will do my best so that SHINee's name can shine for a bit longer. Since these members gave me such beautiful memories and I'm so thankful to everyone," he added. "I want to receive love as SHINee in the future. I want to overcome and confidently stand on stage to show SHINee to our member in heaven. I'm very sorry for making fans worry. Please look over us in the future. Stay healthy in the cold weather and happy new year." 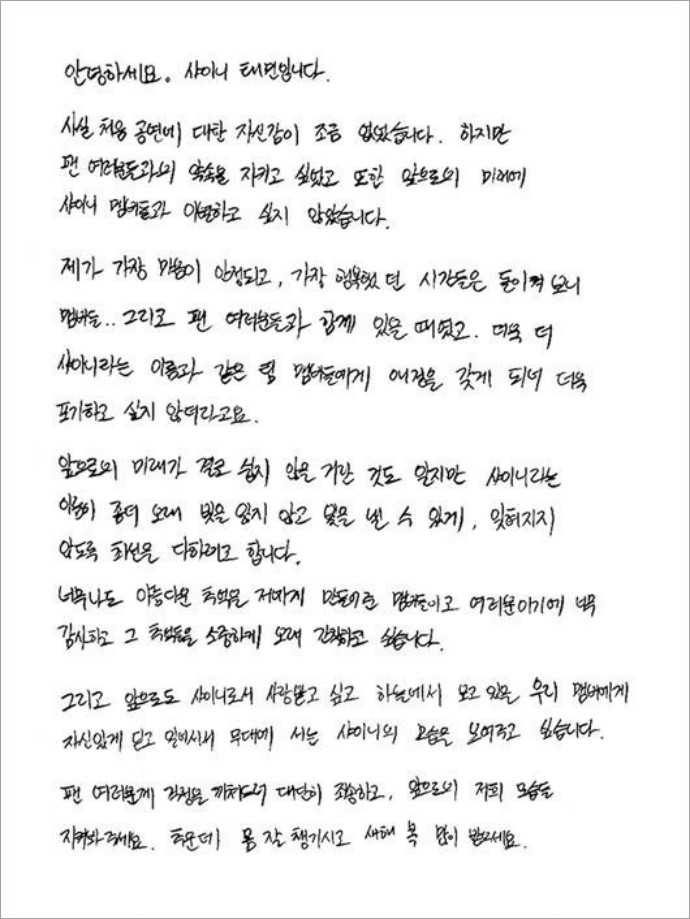