Chrissy Teigen Is Pregnant With Her Second Child - See Her Baby Bump!

The 31-year-old model debuts her blossoming baby bump on Snapchat after announcing her second pregnancy with a cute video on Instagram.

AceShowbiz - Chrissy Teigen is going to be a mother of two. The model has taken to her Instagram account to announce that she's expecting her second child with husband John Legend, sharing a cute video of her firstborn, Luna, playing with the model's stomach along with the caption that reads, "it's john's!"

Chrissy can be heard in the background of the clip asking her 16-month-old daughter, "Luna, what's in here?" while pointing at her own belly. The little girl then points at her mom's stomach and proclaims, "BB!" with the 31-year-old model and her singer husband responding to it with a laugh.

After announcing her pregnancy, Chrissy takes to Snapchat to show off her blossoming baby bump. Sharing a mirror selfie of her wearing a formfitting black, strapless dress, she writes across the snap, "Very excited to not have to hide this anymore. Everyone I told first was like 'uh yeah, we knew thanks.' " 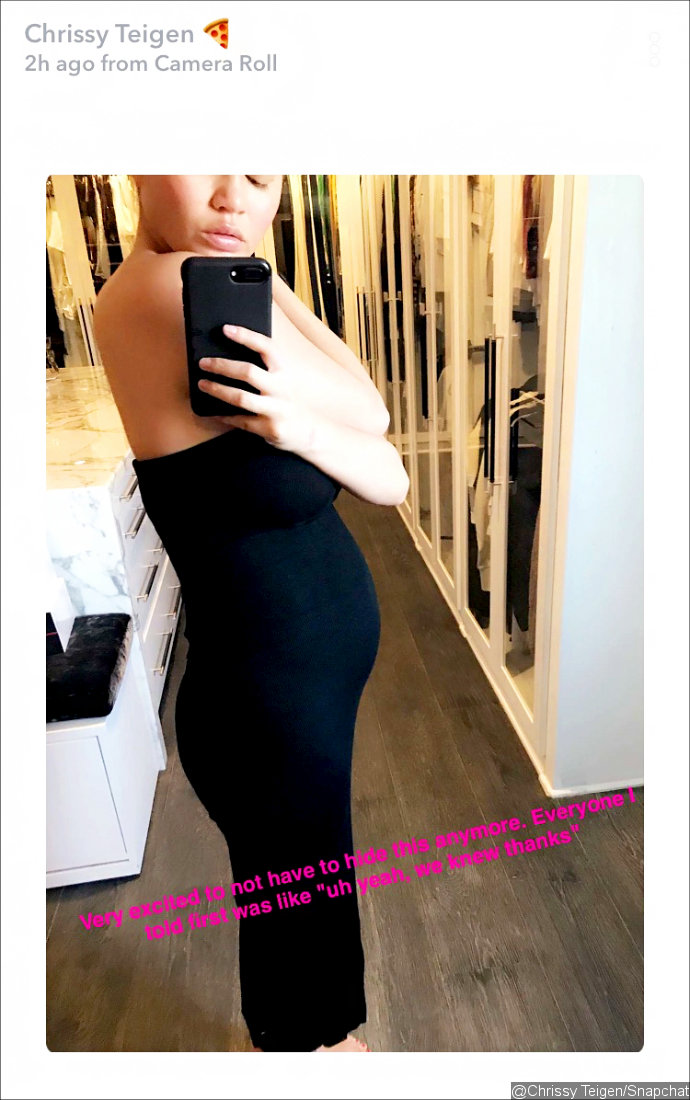 Chrissy and John, who tied the knot in September 2013 in Lake Como, Italy, has been open about their desire to expand their family, and the model has also talked about her struggles to conceive before welcoming Luna via IVF in 2016.

The "Lip Sync Battle" co-host previously revealed to InStyle that she and John were ready to try for a second child through IVF. The couple created and froze embryos via IVF years ago, and doctors determined only three were "good for my body." She told the mag in its November issue, "The first little girl didn't work, and then the second is Luna."

Chrissy revealed back in January that the remaining embryo was male, saying that it would be "a little boy next, for sure." Last year, she also told PEOPLE, "A boy will come along. We'll get there, too, so it's not like we really have to pick."

'Dancing with the Stars' Season 25 Finale Recap: Who Wins the Mirror Ball Trophy?