AceShowbiz - The stars have started to walk down the red carpet of the 88th Annual Academy Awards on Sunday, February 28. The night's female nominees such as Alicia Vikander and Brie Larson pick bold colors and cuts as their fashion statement while most of the men keep it tidy with black tux.

Vikander looks lovely in a yellow dress by Louis Vuitton. The strapless gown has silver embellishment from the top to toe but it's the puffed rims that become the focal point. Just being here feels so surreal," says the best supporting actress nominee for "The Danish Girl".

Meanwhile, Larson wears a bright blue satin dress by Gucci. The Best Actress nominee for "Room" says she has better appreciation of single mothers out there, including her own mom, after taking the role. "I grew up with a single mom in a small apartment, and I realize this was a way to [honor] my mother," she says. "There's so many things you can't possibly understand [as a child]".

The best blue on the red carpet is on Brie Larson #Oscars pic.twitter.com/iqUd0lknM1

Lady GaGa, whose fashion choice is one to await for, appears in a Brandon Maxwell white jumpsuit which is added with long train. The Best Song nominee, who walks down the red carpet with fiancee Taylor Kinney, makes no effort to add accessories to her pale look.

Olivia Wilde steals the attention in her white dress with plunging neckline. The Valentino dress accentuates the mother of one's cleavage. Earlier tonight, Saoirse Ronan also shows off some side boobs in an emerald green by Calvin Klein Collection.

Some ladies prefer to cover up their arms this year. Rooney Mara goes with a long-sleeved white gown from Givenchy, which is slit in the middle and in the abdomen area. Margot Robbie is the golden girl with her plunging v-neck dress.

Rooney Mara in white on the #Oscars red carpet pic.twitter.com/qW4pJxmiSj

Some highlights from the red carpet include the reunion of former "Titanic" co-stars Leonardo DiCaprio and Kate Winslet. He wears an Armani tuxedo while she sports a liquid gray dress by Ralph Lauren. Jared Leto also makes a statement with his black and red tux which has a rose for a tie.

Kate Winslet and the man of the night, maybe, #LeonardoDiCaprio #Oscars pic.twitter.com/d0RBWpSDSr

Jared Leto has a flower for a bow tie and that super cool #Oscars pic.twitter.com/IIa1UDF39m 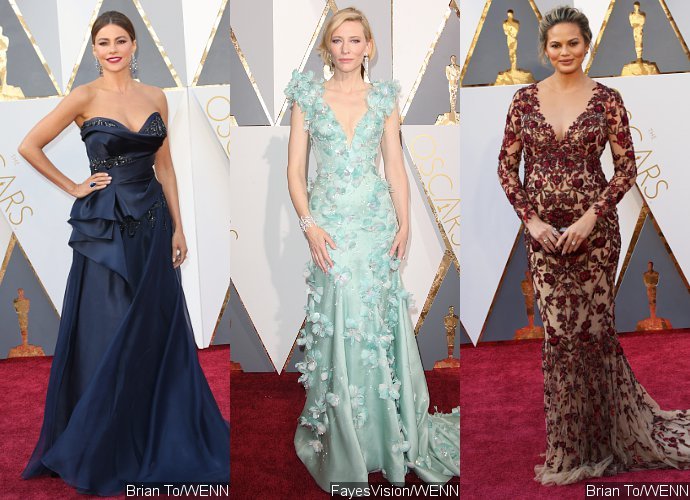