The 'Die Hard' actor left a whipping $923 tip after he and his wife had a lavish dinner with his business partners at Grace Restaurant on Saturday, May 9.

AceShowbiz - %cBruce Willis% surprised a waitress on Saturday night, May 9 after he gave her a whipping $923 tip. The 60-year-old actor and his wife %cEmma Heming% had a lavish dinner with model %cKarolina Kurkova% and 13 business partners at Grace Restaurant in Berlin.

According to German newspaper Bild, Bruce and the group feasted on codfish, lobster, filet mignon and pasta. They also indulged in fine wines, Moscow mule cocktails and tequila until the early hours of Sunday morning. The "Die Hard" actor was satisfied with the restaurant's service and splashed out a big tip for the waitress.

The lucky waitress, which is only identified as "Rachel S", allegedly spent the money partying with colleagues after her shift.

Bruce and Emma were spotted leaving Berlin on Sunday, May 10. The "A Good Day to Die Hard" actor was all smiles when they headed for the aircraft on a Berlin airstrip. He wore black sunglasses, a black leather jacket over a white tee and grey jeans. Emma, meanwhile, sported no make up, completing her look with frame glasses, a striped top, a white blazer and ripped skinny jeans.

'Dancing with the Stars' Semifinals: Riker Lynch and Nastia Liukin Are Neck and Neck 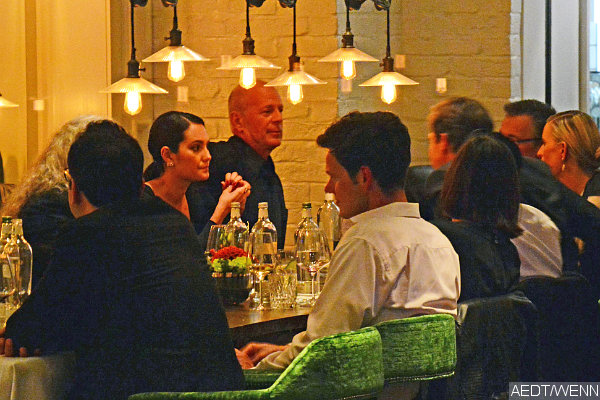