Taking her clothes off, Lawrence was photographed with a strategically placed Colombian red-tailed boa constrictor slithering around her curvy body.

AceShowbiz - Vanity Fair has on Thursday, January 5 shared on its Instagram a snap of Jennifer Lawrence posing completely nude with a giant snake slithering around her curvy body. The photo reportedly came from the actress' November 2014 Vanity Fair cover shoot taken by Patrick Demarchelier. 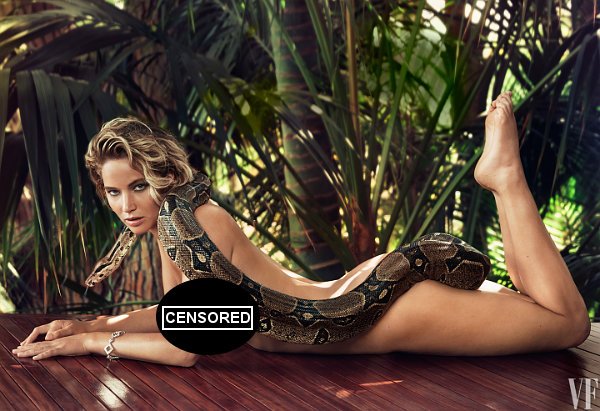 The shot, which featured a strategically placed Colombian red-tailed boa constrictor, was meant to pay homage to a Nastassja Kinski photo for Vogue back in 1981 which was taken by photographer Richard Avedon. Speaking on the just released photo, Jessica Diehl, who styled the photo shoot, was quoted as saying, "Jennifer has the perfect combination of strength, sexuality, and humor, and, above all, tomboy to pull this off."

According to the caption that accompanied the Instagram post, Lawrence's racy photo would be featured on the March issue of Vanity Fair which will hit the newsstands Thursday, February 5.