The 'Super Bass' female rapper will make her Grammy performance for the first time ever when the awards show is held on February 12.

AceShowbiz - Nicki Minaj is officially tapped to make a live performance at the 54th annual Grammy Awards. This will mark her first-ever gig at the prestigious show which will be held at the Staples Center in Los Angeles on February 12.

"Happy to welcome @nickiminaj as a first-time performer on our GRAMMY Awards stage on Feb. 12! #GRAMMYs," so read the note which was posted on the event's official Twitter. The message was quickly re-tweeted by the femcee.

On top of that, she's featured in "2012 Grammy Nominees Album" which will come out in the United States on January 24. A portion of the album proceeds will benefit the MusiCares Foundation and the GRAMMY Foundation, two charitable organizations established by The Recording Academy.

Ian Somerhalder Not Asking Nina Dobrev for Her Hand in Marriage, Rep Clarifies 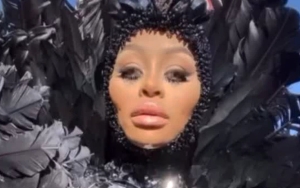