Along with her band and some camera guys, Taylor Swift greeted her fans in Hollywood Boulevard from the top of a bus and performed her songs.

AceShowbiz - Taylor Swift continues to surprise her fans by appearing in some unusual places to support her newly-released studio album "Speak Now". After wowing around 1,500 fans at John F. Kennedy International Airport earlier this week, she hopped a double decker and rode on the streets of Hollywood Boulevard on Friday, October 29.

The country music singer wore casual outfit for the occasion, donning a black and red top matched with black pants. Accompanied by her band, she stopped at some points along the way, strapped a brown guitar and treated people with a mini concert. Some cameramen were spotted following her around to capture the moment.

Her next gig is a live performance at 2010 Country Music Association Awards on November 10 at the Bridgestone Arena in Nashville. She will be joined by the likes of Gwyneth Paltrow, Carrie Underwood, Brad Paisley, Sugarland, Kenny Chesney, Lady Antebellum and Miranda Lambert.

Moreover, Swift has been scheduled to take the stage on a Royal Caribbean cruise ship next year. The "Love Story" hitmaker is going to go onboard the Allure of the Seas liner when the vessel docks in Cozumel, Mexico on January 21 and perform for the passengers.

Taylor Swift's third studio album, "Speak Now" was released in the United States on October 25. It is predicted to debut at No 1 on Billboard Hot 200 by selling near or around 1 million copies and estimated to become this year's best selling album. 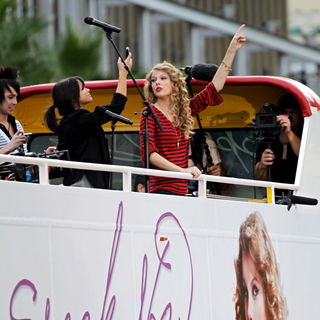 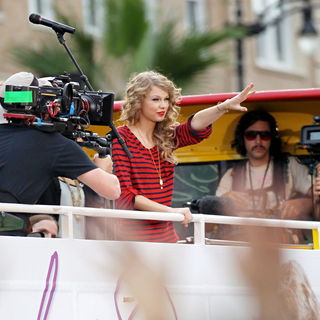 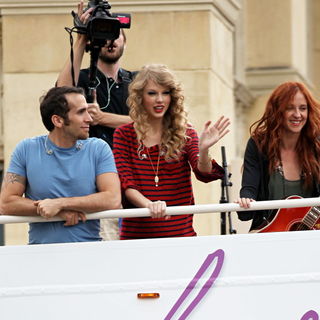