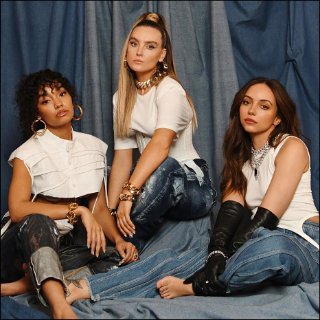 As per the rules of "The X Factor", each member of the band entered the singing competition as a solo artist. They were put together by judges to compete in the "groups" category. They were eventually announced as the winner of the show, becoming the first group to win the competition. Little Mix then signed to %cSimon Cowell%'s record label Syco Music and released a cover of %cDamien Rice%'s "Cannonball" as their winner's single.

Their debut album, "DNA", was released in November 2012. Debuting at No. 4 on Billboard 200, the album became the highest-charting-debut-week entry album by a British girl group in the U.S., a record previously held by %cSpice Girls%' debut album "Spice" which debuted at No. 6 on the chart.

Little Mix didn't waste any time to work on their next album, "Salute". The sophomore album was released on November 11, 2013 in the United Kingdom and on February 4, 2014 in the United States. Featuring singles such as "Move" and "Little Me", it debuted at No. 6 on Billboard 200.

To promote the album, they embarked on a Europe tour called "The Salute Tour" between May and July. The North American leg of the tour was scheduled for September and October, but was later canceled due to the process of recording their next album, "Get Weird".

Preceded by singles such as "Black Magic" and "Secret Love Song" featuring %cJason Derulo%, "Get Weird" hit the stores on November 6, 2015. They became the only girl group to have their first three albums debut in the top fifteen of Billboard 200 after "Get Weird" arrived at No. 13 on the chart. It was additionally certified double platinum in the U.K., making it their best album yet.

Little Mix began working on their fourth studio album, "Glory Days", in June 2016. The lead single of the album, "Shout Out to My Ex", was unveiled on October 16. The song won British Single of the Year at the Brit Awards and Best Break-Up Song at the Radio Disney Music Awards. The album itself was unveiled on November 18.

"Glory Days" was the group's first No. 1 album in the U.K. and spent five non-consecutive weeks atop the chart. It marked the longest run at the top by a girl group since Spice Girls spent 15 weeks at No. 1 with "Spice" in 1996.

After opening for %cAriana Grande%'s "Dangerous Woman Tour" and embarking on "Summer Hits Tour 2018", Little Mix began working on their fifth album "LM5". They unleashed the lead single off the set, "Woman Like Me" featuring %cNicki Minaj%, on October 12, followed by its second single "Joan of Arc" on November 1. "LM5" will hit the stores on November 16.