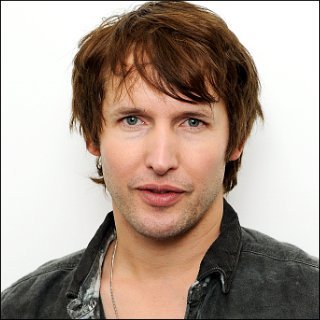 Satisfyingly nabbed the titles of Best Pop Act and Best British Male out of his five nominations at Brit Awards held on February 15, 2006, James Blunt has really shown that he is more than just a commercial act like some people have considered of. Aiming to re-release his single of "Wise Men" on March 13, everything seems to run very well for this striking singer as his world tour schedule has been fixed to be conducted around America, New Zealand, Australia, and Japan for the whole month of April. Also ready to highlight the 2006 Summer Nights Concerts Series in England by late June, he certainly has ample chance to score higher than what he has achieved in the past two years as long as he keeps maintaining his great quality and unusual style within him.

Born James Hillier-Blount on February 22, 1977 in Tidworth, Wiltshire, James came from a military family who did not listen much to music though his mother did introduce him to musical instruments and had him taken classical grades since he was merely a little boy. However, the thought of pursuing a career in this field had never occurred to him until he witnessed an older boy playing an electric guitar at the age 14. Even so, he decided to wait for the right time to accomplish his dream and continued his study at Harrow School then Bristol University majoring in aerospace manufacturing, engineering and sociology before entered the Royal Military Academy Sandhurst to later become a commissioned officer in the British Army.

Afterwards served as a NATO peacekeeper in Kosovo by 1999, James finally left the army in 2002 to begin establishing his journey of becoming a musician. A performance at the 2003 South By Southwest Music Festival managed to garner the attention of Linda Perry who quickly offered him a lavish contract under her label, Custard Records. Helped by her to land a U.S distribution deal with Atlantic Records, he subsequently was brought to Los Angeles for working on his first effort and the result was "Back to Bedlam" which thus was released on October 11, 2004. To his dismal, many predicted that this piece of work would never be a success as it had to struggle hard to take position in U.K chart for nearly half a year.

Intended to prove them wrong, James optimistically launched a single from the album entitled "You're Beautiful" by late May 2005 with the intention to give "Back to Bedlam" a sufficient boost to score higher in the chart. His strategy worked beyond expectation when the tune gloriously soared to secure the highest spot of U.K. singles chart while also received massive airplay which consequently elevated his album to the first rank, replacing Coldplay's "X&Y." This fabulous success amazingly extended to U.S as it managed to enter the top ten of Billboard 200 besides obtained number one slot on both Top Heatseekers and Canadian Albums charts. "You're Beautiful" even was included in the top five of 5 different singles charts, including The Billboard Hot 100 plus Adult Top 40.

By the end of 2005, the sale of "Back to Bedlam" had reached 2.4 million copies in U.K only to then be certified eight times Platinum besides gained Gold status in U.S. and other Platinum in Australia, New Zealand, Portugal, plus Canada. Followed this brilliant attainment with the triumph at the 2005 MTV Europe Music Awards for winning Best New Act category, James truly has transformed into one of the most potential rising music artists in the world's music scene. This growing popularity of his subsequently led to several notable appearances in U.S famous shows, like "Saturday Night Live" (1975) and "Late Night with Conan O'Brien" (1993) aside from an acting debut on ABC Family Channel's "Wildfire" (2005) in late January 2006.

Singing career aside, James has been romantically linked to Camilla Bowler before then split, citing work pressures as the cause. After that he was reported to find new love in The Pussycat Dolls band-member Jessica Sutta shortly after meeting her during a tour of Berlin, where she was promoting her group's single "Don't Cha". Blame this man's charm that in companion with his rising singing career he's been reported dating some women, including the British it-girl Tara Palmer-Tomkinson and Australian TV personality Tania Zaetta. Finally gave his heart to Petra Nemcova, a Czechoslovakian-born fashion model, they then broke up in March 2007 after dating for about one year, presumably because his being romantically linked to actress-singer Lindsay Lohan.

Behind the romantic turmoil, his work on the sophomore effort was still proceeding with long-time producer Tom Rothrock. Taking two years to work it out, James was ready to drop "All the Lost Souls" on September 17, 2007 with first single titled "1973".