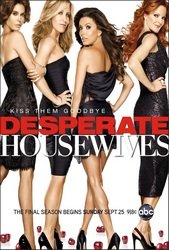 Lynette's mom, Stella (guest star Polly Bergen), comes to town with news that she's getting married. Her fiance Frank (guest star Larry Hagman) is a total tool. The guy's rude, crude and obnoxious. He's also loaded, which is the only reason Stella is marrying the jerk. Judging by the actor who plays Frank, we're thinking the guy may have made his money in the oil industry.

Tom convinces Lynette to suck it up and support her mom on her wedding day. But as she's pushing the wheelchair-bound bride-to-be down the aisle, Lynette rolls her mom right out the door. Stella tells her daughter that she's not really marrying Frank for his money. She's with the guy because he needs her and that makes her feel good inside. With that, Lynette wheels her mom back into the church. Who knows? Frank has a bad ticker. Maybe he'll keel over during the honeymoon.

Susan tries to become dialysis buddies with a man named Dick, whose bad attitude fits nicely with his name. He's a mean old man who rejects Susan's multiple attempts to be friendly. See, Dick's been doing the dialysis thing for years. He has no room in his life for optimism.

Susan realizes Dick actually does have hope when there's chance he's being contacted for a new kidney. But alas, the call is for someone else. Susan can see the guy is crushed. She grabs a seat next to him and takes hold of his hand. Dick takes her hand, too. After all, you can never have too many dialysis buddies.

Bree meets a pretty woman named Amber James. She's Keith's ex-girlfriend. They haven't seen each other in seven years and Keith has no idea she even stopped by. Bree, however, pays a follow-up visit to Amber and meets her six-year-old boy, Charlie, who also happens to be Keith's son.

Amber never told Keith about Charlie. Bree offers to break the news for her. But she can't do it after hearing Keith admit that he gave up the concept of kids when he chose to be with her. Bree never tells her boyfriend about Charlie, but leads Amber to believe that she did. She hands the woman a check, leaving her with the idea that Keith didn't want to meet his own son. Oh boy. Not good.

Bob and Lee hire Renee to design their adopted daughter's bedroom. She's not very maternal, but she's 20 percent cheaper than their first choice. Surprise, surprise! Renee does an amazing job. She used her past desire to have kids as inspiration. Renee becomes supremely uncomfortable when Lee suggests that it's never too late to adopt. They obviously hit a nerve. All is well, however, once Renee meets the new kid on the block and agrees to help Bob and Lee should she ever need advice about lady stuff. Just don't call her Aunty Renee.

When Gaby notices that Mrs. McCluskey has a doll, she suggests they have a tea party with Princess Valerie. The word Mrs. McCluskey is looking for is - huh? Carlos realizes the doll is Gaby's way of coping with the loss of Grace. Things go from bad to worse when they become victims of a carjacking. Carlos has to pull Gaby away from the gunman after she refuses to leave the car without her doll. The carjacker speeds away as Carlos tries to comfort his devastated wife.

Beth catches Paul sitting in a corner, crying in the middle of the night. He has so much hatred for all those who have wronged him. Beth has no idea that her hubby now thinks she's one of those people. Otherwise, we doubt she would have accepted his invitation to a remote cabin in the woods. Seriously, does anything good ever happen in remote cabins?

The police detectives investigating the shooting approach Paul moments before he and Beth are to leave on their trip. They ask if he recognizes the gun that was found at Bree's place. It's obvious he does. He says, "Detectives, I know for a fact this is not Beth's gun." Paul then cancels the trip to the cabin, as he now believes the bullet that pierced his body may have come courtesy of his long lost son, Zach. 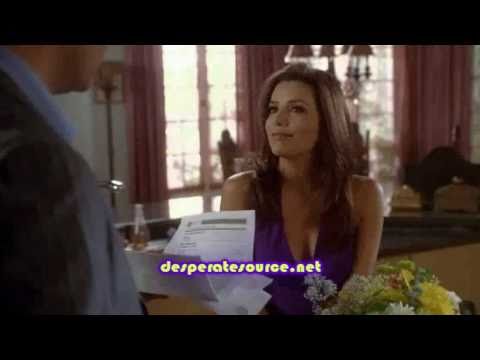