The 33-year-old 'Ex's and Oh's' singer makes use of her Instagram Story to share that she's forced to pull out of upcoming shows after suffering concussion from falling down stairs at night.

AceShowbiz - Elle King was forced to cancel three upcoming shows after falling down the stairs that resulted in a concussion. The 33-year-old musician shared the news on Instagram Story on Thursday, December 8.

"No one ever wants to pull out of shows, especially me," the Grammy-nominated singer wrote to her fans after canceling shows in Seattle, Tampa and Detroit. "I live for performing. I slipped down the stairs making a bottle in the middle of the night, knocked my a** out, resulting in a concussion."

The "Can't Be Loved" songstress revealed that she "tried to push through and played 3 shows, but the travel, lights, all of it only exacerbated things. I'd like to thank the artists that stepped in and filled my slots, as well as the radio stations for their understanding and continued support."

Ending her statement, Elle penned, "I wish you all happy and healthy holidays and I can't wait to get back out next year and sing with you soon." 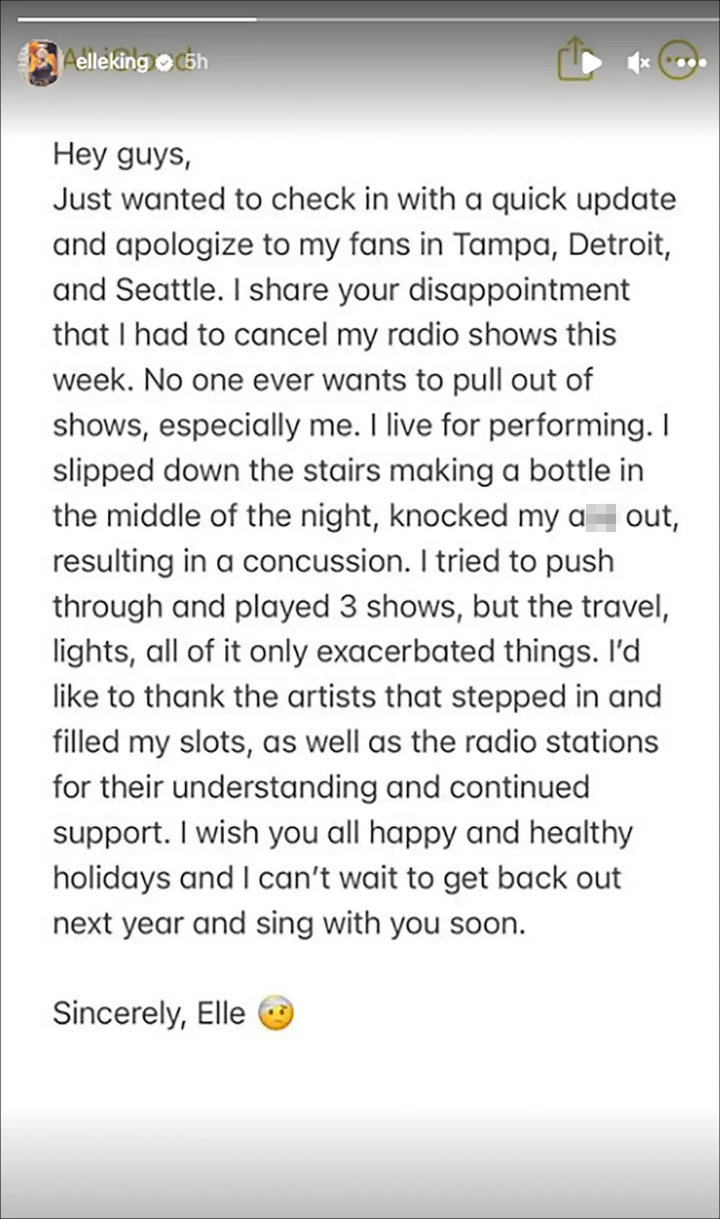 Elle King canceled her three shows after falling down stairs.

Prior to this, Elle shared that she's planning to focus on mom duties. The "Ex's and Oh's" singer and fiance Dan Tooker welcomed their son in September 2021 after suffering two miscarriages. Despite the struggles, Elle noted that it made her a better person.

"Motherhood has made me a gentler person, a stronger person, someone who tries to be … I'm still working on being less reactive, but I'm happy," she told PEOPLE back in October. In fact, she added that it "will f**ing humble your a**."

In the interview, Elle also gushed over her fiance Dan, to whom she got engaged in July 2019. Calling him "an incredible partner," she raved, "I want my son to see that he has two parents with dreams and they work really, really hard to do it." Elle went on to stress that she has "never been so happy."