The newly-divorced Tampa Bay Buccaneers quarterback is co-parenting his children, 10-year-old Vivian and 12-year-old Benjamin, with his ex-wife Gisele Bundchen.

AceShowbiz - Tom Brady proves that he still has a healthy relationship with his kids despite sharing child custody with his ex-wife Gisele Bundchen. Making use of his Instagram account, the NFL star posted supportive yet funny text from his son Benjamin ahead of his football game.

On Tuesday, December 6, the 45-year-old proud dad posted a screenshot of his iMessage with Ben. "[a bunch of red heart emojis] I will be watching. Say hi to me on camera," read the text sent by the 12-year-old boy. In response, the seven-time Super Bowl champion wrote, "YES!!!!!!!!" to which the kid only answered with a single "K."

Tom later sent Ben an emoji of hands making the shape of a heart. Ben then responded with a funny text that read, "Go and do what you do best. Kick some butt." Along with the screengrab, the footballer wrote, "The best motivation any Dad can have!! I love you Benny [trio heart emojis]." 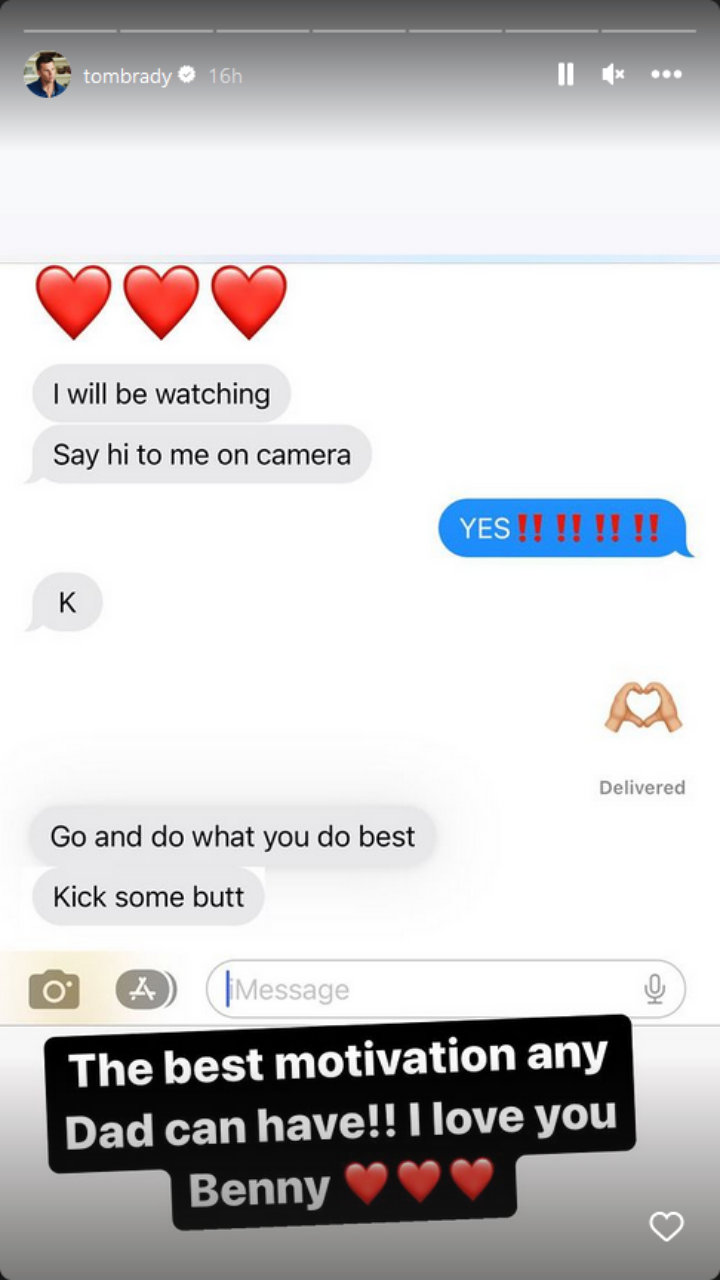 Tom Brady shared motivational yet funny text from his 12-year-old son ahead of a football game.

Tom, who shares Benjamin and 10-year-old Vivian with ex-wife Gisele, often posted sweet moments with his kids lately. On Monday, December 5, the quarterback celebrated Vivian's birthday with a sweet tribute he posted on his Instagram feed.

In the adorable post, Tom embraced Ben and Vivian as the trio spent time together at a holiday market in New York City. He gave son Ben a kiss on the head while Vivian smiled for the camera and held up peace signs.

"Happy 10th Birthday Vivi! We adore you and your beautiful heart [red heart emoji]! You bring so much joy to our life! We love you [smiling face with heart emoji]," so Tom captioned the post. In the comment section, Gisele showed some love by dropping a single red heart emoji.

Tom hailed his Jack as "my inspiration" in the note accompanying the image. Showing some support to the father-and-son duo, Brazilian-born Gisele left a single red heart emoji in the comments section.

Tom and Gisele were legally declared single on October 28. The former couple, who were married for 13 years, agreed to have joint custody of their kids, allowing the children to have "full access" to both parents.