A month after finalizing her divorce, the Brazilian supermodel appears to show support to her now-ex-husband as well as her 15-year-old stepson Jack on social media.

AceShowbiz - Gisele Bundchen is giving nothing but love to her family. The Brazilian supermodel subtly shows love to her former husband Tom Brady after they went their separate ways due to their alleged different priorities.

The 42-year-old beauty turned to her Instagram to react to the NFL star's post that saw her stepson Jack, whom Tom shares with his ex Bridget Moynahan, joining the Tampa Bay Buccaneers' pre-Thanksgiving practice. The father of three hailed his 15-year-old son as "my inspiration" in the caption. Showing some support to the father-and-son duo, the model left a single red heart emoji in the comments section. 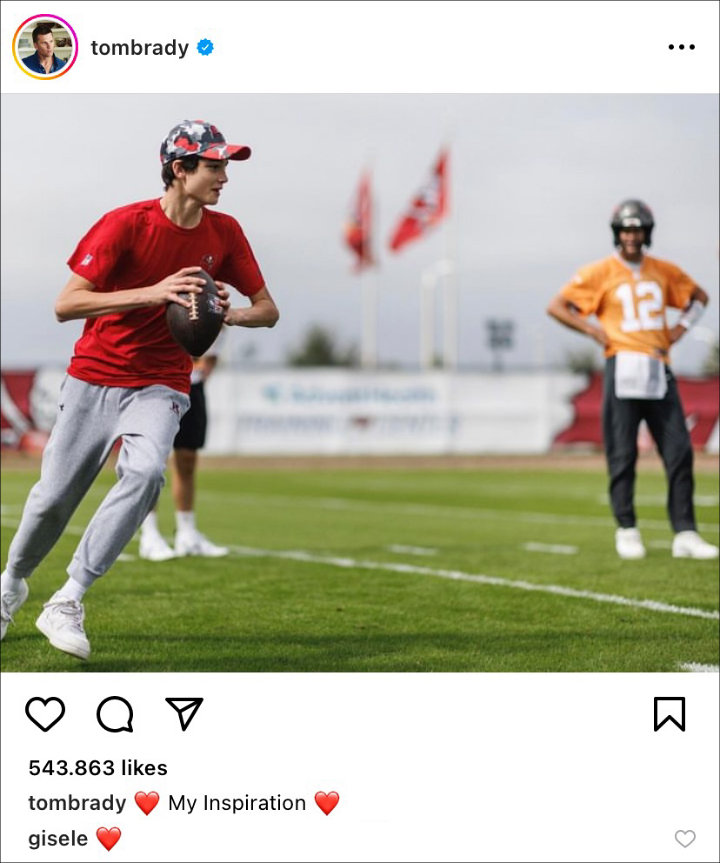 Aside from sharing the photo of Jack ahead of the Thanksgiving celebration, Tom shared a picture of his daughter Vivian. In it, the 9-year-old girl looked happy while horse-riding. Over the image, he sweetly penned, "My baby," along with three red heart emojis.

Tom finalized his divorce from his wife of 13 years Gisele on October 28. The former couple, who agreed to have joint custody of their kids, 12-year-old Benjamin and 9-year-old Vivian, was able to settle the case easily thanks to their "ironclad prenup" which they signed a few years ago.

Earlier this week, Tom hinted that he would be celebrating Thanksgiving with Gisele and their kids. "I think myself as a parent and being thankful during Thanksgiving, it's always time for family," he said in the November 21 episode of his SiriusXM podcast "Let's Go!".

"It's just, I'm here in my 23rd season, looking forward to finishing strong here after Thanksgiving, and obviously with a lot of gratitude for the people that have made such a huge impact in my life and supported me throughout this amazing career," Tom further shared. The athlete went on to say, "And, you know, I just want to be that for my kids. I just wanna be the best dad I could be."

However, there's no sign that the now-exes are celebrating the turkey-centric holiday together. Instead, Tom trolled himself in a video without Gisele and their kids when wishing his fans a happy Thanksgiving.