Melanie Martin takes to her Instagram Story to unveil the last photo that the 'I'm Gonna Miss You Forever' singer took of them, capturing their intimate moment on bed.

AceShowbiz - Melanie Martin is keeping her memories of her late fiance Aaron Carter in her mind and pictures. While she wasn't with him when he was found dead at his home in Lancaster, California earlier this month, Melanie apparently got to spend quality time with the singer just several days before.

On Tuesday, November 29, nearly a month after Aaron's tragic passing, Melanie has shared their last picture together. It's a selfie that the "I Want Candy" hitmaker took as they were on bed. Melanie's face was not clearly seen, but her head was seen lying near her fiance's chest and her hand was on his face.

"October 29 th the last pic he took," she captioned the intimate snap that she posted to her Instagram Story. "I was always passed out on him like this. He let me sleep on him instead of pillows I miss this so much."

Melanie then reposted the same image with a different caption. "Last pic he hook [sic] of us October 29. I never slept on pillows just his chest," she wrote. 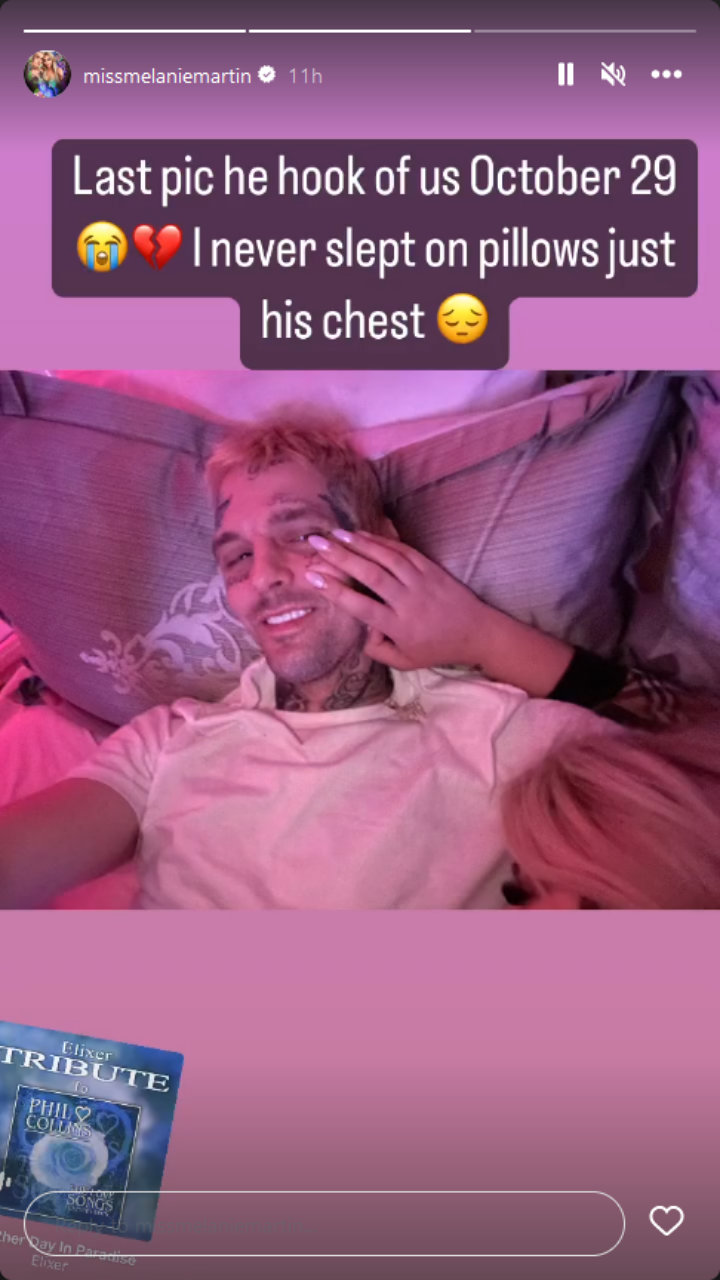 In other news, Aaron's family has revealed what they plan to do with his ashes. His mom Jane tells TMZ that the family intends to spread his ashes in the ocean sometime in the spring. They plan to spread some of the ashes in Florida Keys with some remains from his late sister Leslie Carter.

The family will save some of Aaron and Leslie's ashes so they can later be buried with their mom Jane. His twin sister Angel currently still keeps his ashes and Aaron's mom says his fiancee Melanie will not be part of the family's ceremony next year in the Keys.

Jane also reveals that Lance Bass of NSYNC recently reached out to Nick Carter and Angel to offer the Carters his home in Los Angeles to be used for a memorial service for Aaron. The family, however, paused the plans because people have reportedly made death threats against the family since Aaron's death.

Jane additionally says she and Aaron were texting with each other just a few days before he died.

Aaron's body was found in his bathtub by a housekeeper on November 5. He was 34 years old. He was cremated on November 9. His son with Melanie, Prince, recently turned 1 year old.