The 'Kiss Me More' hitmaker and the 42-year-old emcee show support to the Trinidadian raptress after her name is nowhere to be found in the nominations list.

AceShowbiz - Doja Cat and The Game are showing some support to Nicki Minaj after the latter was snubbed by 2023 Grammy Awards. Both Doja and The Game turned to their respective social media accounts to defend the "Super Freaky Girl" raptress.

On Wednesday, November 16, Doja was asked by a fan on Twitter, "don't u have anything else to say after a grammy nomination?" In response, she simply said, "yes." The "Kiss Me More" hitmaker, however, didn't offer any detail.

Then, another fan replied to Doja's tweet with a screenshot of her old post that read, "nicki queen of rap." The said person wondered, "this?" Showing support to the Trinidadian raptress, Doja declared, "basically." 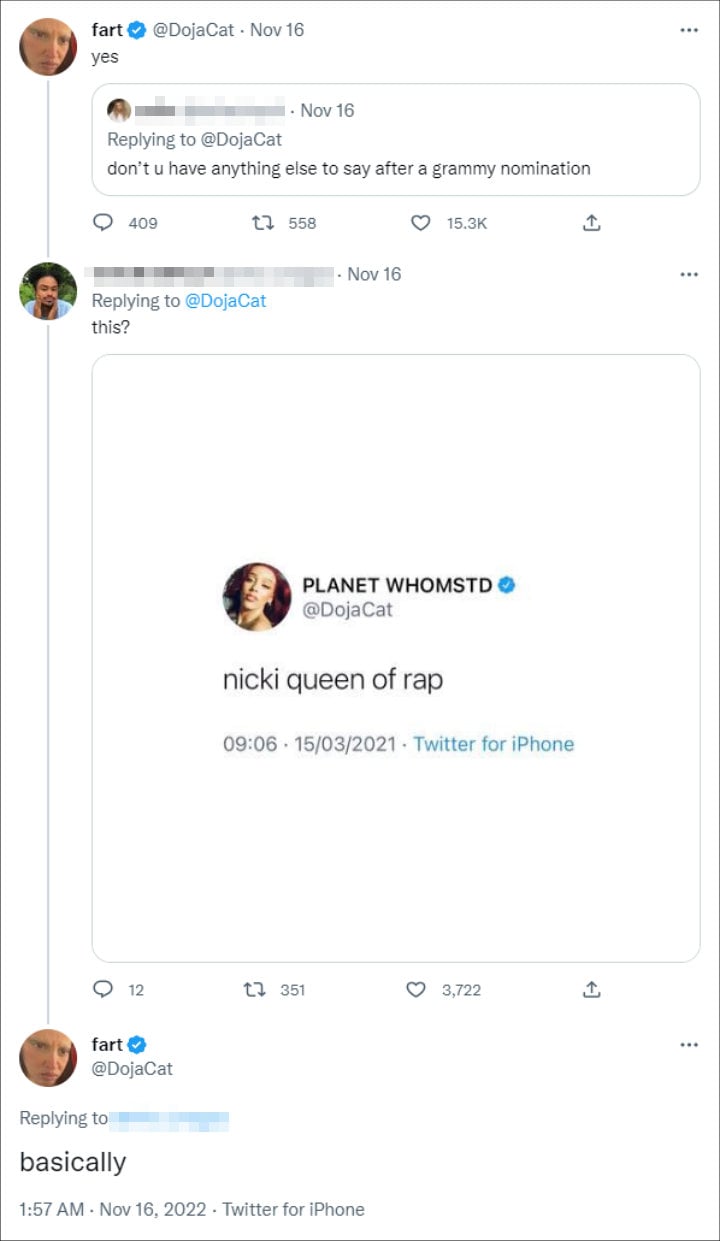 Also defending Nicki after her name wasn't listed on Grammys nominations list was The Game. Making use of his Instagram Story, the "How We Do" emcee stepped forward with supportive messages.

When reposting a post from Hollywood Unlocked that read, "#NoGrammyForGranny Trends on Twitter Arter Nicki Minaj Misses Out on a Single Nomination," The Game wrote, "This is funny because Nicki is hands down the reason the female rap game of this era is thriving the way it is!!!!!!!!!" The 42-year-old rap artist added, "Literally nuts mfs act any differently."

The Recording Academy announced the nominations list on Tuesday, November 15, a month after Nicki complained about how the Recording Academy categorized her hit "Super Freaky Girl" as Pop. Fuming on Twitter, Nicki insisted that if Latto's "Big Energy" was a rap song, then hers should also be considered one.