Princess Love Admits to Having Threesomes for Ray J's Sake

After a clip of their argument from 'Love and Hip Hop: Hollywood' goes viral, the former 'Celebrity Big Brother' contestant disputes his estranged wife's claim that she got intimate with other women to make him 'happy.'

AceShowbiz - Princess Love apparently has gone to great lengths to keep her marriage to Ray J intact, though it didn't work. In a new episode of "Love & Hip Hop: Hollywood", she claimed to have had threesomes for the sake of her estranged husband.

In a clip from the VH1 series, Princess can be seen arguing with Ray J about their divorce and the pressure of trying to keep up with his appetite for a new sexual adventure, with or without her. To that, Ray J clapped back at Princess over the cheating allegations by indicating that she was always present every single time he engaged in a sexual act with another woman.

"Anything I've ever done, you've done it with me," the ex-boyfriend of Kim Kardashian angrily shouted at the mother of his two children.

"But, nothing is ever enough for Ray," she continued. Princess said in the end she can't keep "sacrificing" herself and her sanity trying to be something that she's not to "make him happy."

Ray J wasn't happy with how he was portrayed in the episode and the negative headlines. After the clip went viral, she disputed Princess' claim that she got intimate with other women to make him "happy."

In a comment of The Shade Room's post, he wrote, "To make me happy? Blog Headlines Matter! - wish y'all could stay neutral on the headline - but It's life- I'll take all the negativity- we family for life so I'll be wrong all the time. - I love @princesslove - I'll never love again- period." 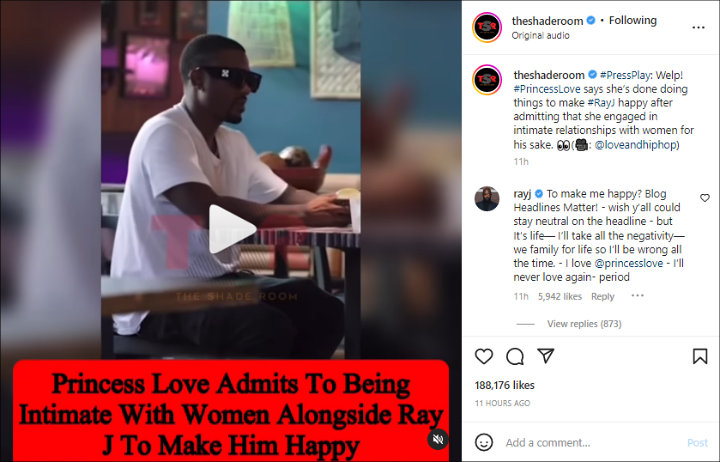 Princess and Ray J got married in 2016 and welcomed their first child together, a daughter named Melody Love, on May 22, 2018. Their second child, a son named Epik Ray, was born on January 7, 2020.

Princess filed for divorce from Ray J in May 2020. Several months later, it was reported that the two were working on saving their marriage. "We're in a good place right now," the "One Wish" musician said in February 2021. Princess then filed a dismissal of her divorce papers in March.

However, several months later, Ray J hinted at a split from Princess. In September 2021, he declared that he was "separated and single" in his Instagram bio.

Khloe Kardashian 'Contemplating' Getting Boob Job After Looking at Her Sisters

Princess Love Shuts Down Idea of Reconciling With Ray J