In an Instagram Story post, the 36-year-old 'Queen and Slim' actress also urges the 45-year-old rapper and Yeezy designer to stop sharing his 'toxic' opinions.

AceShowbiz - Jodie Turner-Smith has branded Kanye West "disgusting." The "Queen & Slim" actress slammed the "embarrassing" rapper after he caused controversy with his Yeezy fashion show in Paris on Monday, October 3 by wearing a "White Lives Matter" T-shirt. She also urged the 45-year-old star to stop sharing his "toxic" opinions.

"i thought he said he was trying to bring people together??? fake and disgusting and embarrassing," she wrote on her Instagram Story. "Please go touch some grass and stop sharing your toxic thoughts (sic)".

Jodie shared her message over a screenshot of one of Kanye's own posts, which read, "WHEN I SAID WAR I MEANT WAR.(sic)" 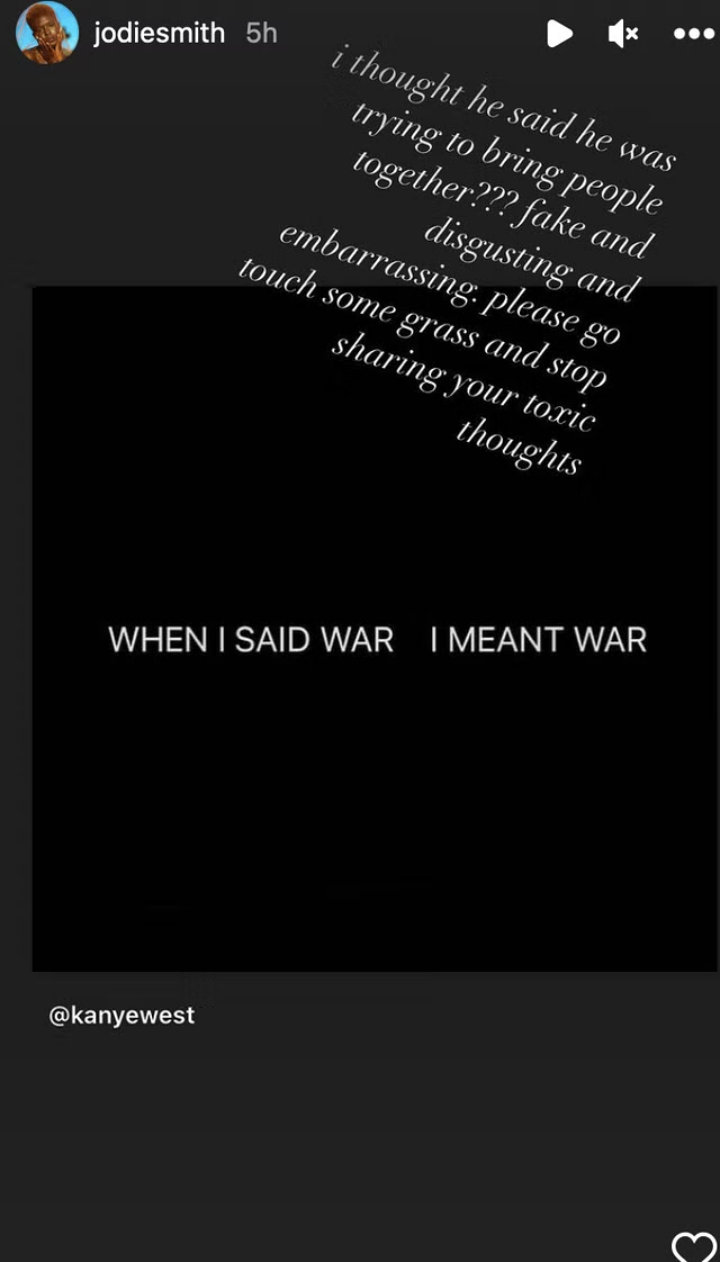 The 36-year-old star went on to share other people's comments about Kanye's show. One was a tweet from Jaden Smith, who had walked out of the show early. He posted, "I Don't Care Who's It Is. If I Don't Feel The Message I'm Out. Black Lives Matter (sic)"

She then shared one from Vas J.Morgan, who hit out at Kanye's "horrendous" decision. He wrote, "As one of his fans and biggest cheerleaders, it is Extremely disappointing that Kanye West used his incredibly large platform today to set us, as black people back centuries. This is far deeper than a Tshirt. This is horrendous."

The "White Noise" star also showed followers a comment from producer Van Lathan. It read, "We don't need a reminder of the worth of white lives. America is a shrine to the worth of white people. This message is reactionary to a message affirming the worth of Black lives, which have never been worth anything in America."

Meanwhile, Gigi Hadid has also blasted the "Heartless" rapper after he mocked Vogue editor Gabriella Karefa-Johnson in response to her criticism of his show. Commenting on one of Kanye's Instagram posts, Gigi wrote, "You wish u had a percentage of her intellect. You have no idea haha…If there's actually a point to any of your s*** she might be the only person that could save u. As if the 'honor' of being invited to your show should keep someone from giving their opinion..? Lol. You're a bully and a joke.(sic)"

Gigi later took the dispute to her own Instagram Story, slamming Kanye for his "immature bully behaviour" and warning of how "dangerous" constantly giving him a platform to air his controversial views can be.

She wrote, "I was trying very hard not to give that man air time, but publicly bullying someone who criticises your work on your massive platform is another level of ridiculousness to me. If you can't take it don't dish it. If you can't take criticism, especially the smart, nuanced, and kind criticism that GKJ provided [after] yesterday's show, then don't put work out for public consumption. This is immature bully behaviour. It's behaviour that we have all enabled by continuing to engage with this work for the sake of vitality, web traffic, mere curiosity, or whatever it is. Enough. It's not smart. It's not interesting. It's not nuanced. It's dangerous."