The fashion designer posts a touching message in which she reveals that her heart is 'broken' after her father-in-law Doug Rosenman, who loved her like his own daughter, passed away at the age of 78.

AceShowbiz - Whitney Port has announced that her father-in-law has sadly passed away. Taking to her social media account, the 37-year-old fashion designer paid a heartfelt tribute to her husband Tim Rosenman's dad.

Whitney made use of her Instagram Stories to reveal her husband, who is a TV producer, has lost his father Doug Rosenman aged 78, and her family's hearts have been left "broken." She wrote, "We lost our sweet Pop Pop, Timmy's dad, this past Saturday. Our hearts are broken. He became my dad after my dad passed, and I can't begin to describe the hole in our hearts."

Whitney, who has five-year-old son Sonny with Tim, admitted Doug loved her "like his own daughter" and was always there for her when she needed him. She added, "He listened to me like no other, felt when I needed a father/daughter talk, loved me like his own daughter and he was sweet as sugar."

Whitney continued, "Sometimes people can just make you feel like home wherever you are, and that's how he made me feel. He helped mold Timmy into the incredible man he is today and I will miss him forever." She went on saying, "Doug/Pop Pop - I hope you've found my dad in the clouds and will watch and protect us from whoever you are. We love you endlessly. (sic)" 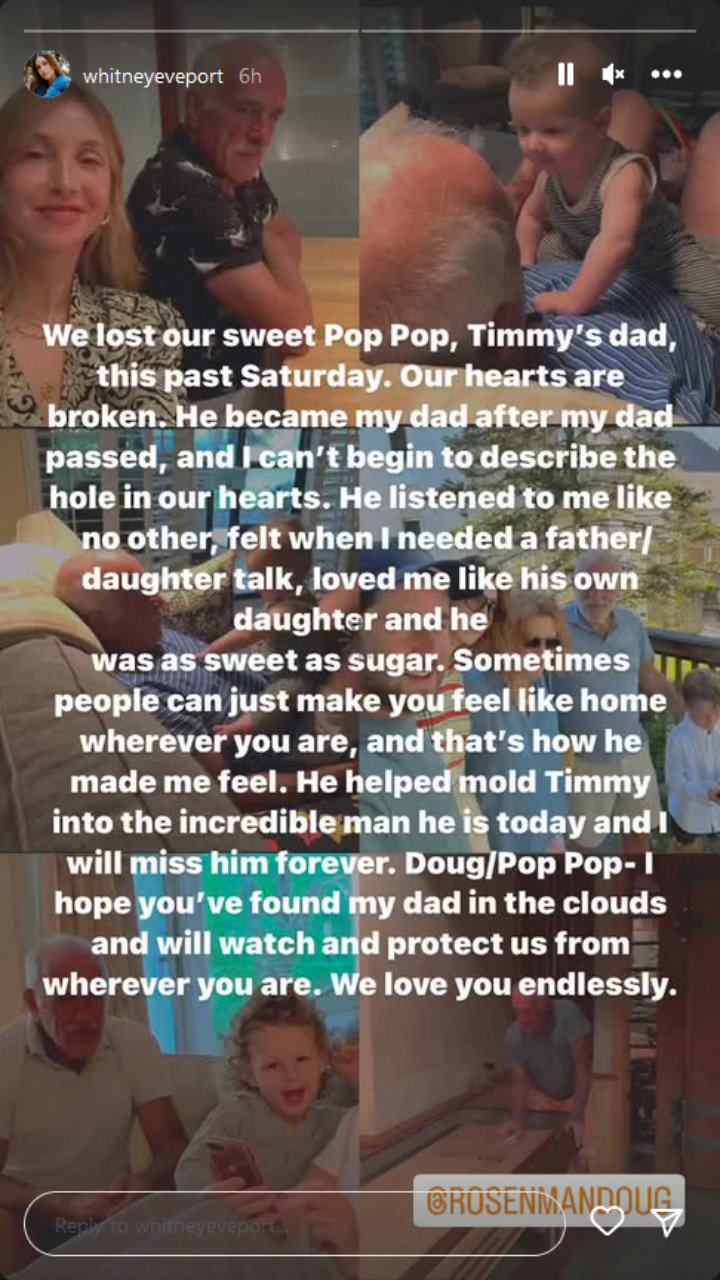 Whitney's dad Jeffrey Port died in March 2013 aged 62 of kidney cancer. In 2017, the star admitted she missed her father "more and more" since giving birth to Sonny.

She wrote at the time, "As some of you may know, I lost my dad to kidney cancer almost 5 years ago. It has been a traumatic and grief filled world for me for so many reasons. Simply put, he was my dad."

"He was the main man in my life for almost all of my life and really ruled at it. I miss him every single day. More recently, really since Sonny was born, I find myself missing him more and more," Whitney shared. "It's unfortunate how such amazing times in ones life, like getting married or having a baby, can be colored with such darkness. Again, I hate to be a total downer, but this is the reality of so many of our lives."

Whitney went on, "We are so happy but then quickly feel the loss of their presence and it's really hard to come to terms with. In this Chapter of I Love My Baby But, I Miss My Dad, we discuss what I miss most about my dad, what I would ask and say to him today, how to continue to honor him and how to pass on the lessons he taught me so his legacy lives on and on and on as he deserves. I'd love to know how any of you out there who have lost parents have taught your children about them and kept the spirit of them alive. (sic)"

Whitney Port Pregnant With Second Child, Scared as Doctor Is 'Pessimistic' About Her Fetus