Claire Stoermer is also fuming on social media after many news outlets use a picture of her cheering for Serena Williams at the U.S. Open for an article about the 'Euphoria' star at the Emmys.

AceShowbiz - Zendaya Coleman's mom moral support was probably very appreciated by the star at the recent Emmys, but she could have missed it. Claire Stoermer has revealed that she was almost not allowed to approach her actress daughter at the Monday, September 12 ceremony.

Following the 74th annual Primetime Emmy Awards where Zendaya won her second Emmy for Outstanding Lead Actress in a Drama Series, Claire took to her Instagram Story on Tuesday to share a snap taken of her and her daughter at the event. In the caption, she wrote, "[I] made my way to Z before they awarded her the Emmy and gave her the biggest hug and said... breathe!!!"

The problem was Claire almost wasn't allowed to approach her daughter's table. "The man who tried to stop me said 'where are your credentials?' " she continued sharing. "i said 'i'm zendaya's mom' and kept walking!! hahaha! i never name drop like that but i have to do it!"

Claire Stoermer shared a picture taken with her daughter Zendaya at the 2022 Emmys.

In another Story posted on Wednesday, Claire called out news outlets which used a picture of her that didn't fit with an article about her daughter. "So many people have sent me this," she wrote along with a screenshot of her monitor displaying one of the articles in question.

She added of her issue with it, "it's like why did they take a picture of me from the U.S. Open where I'm cheering for Serena and use it for an article about my daughter at the Emmys....it just is so stupid and irritating!" 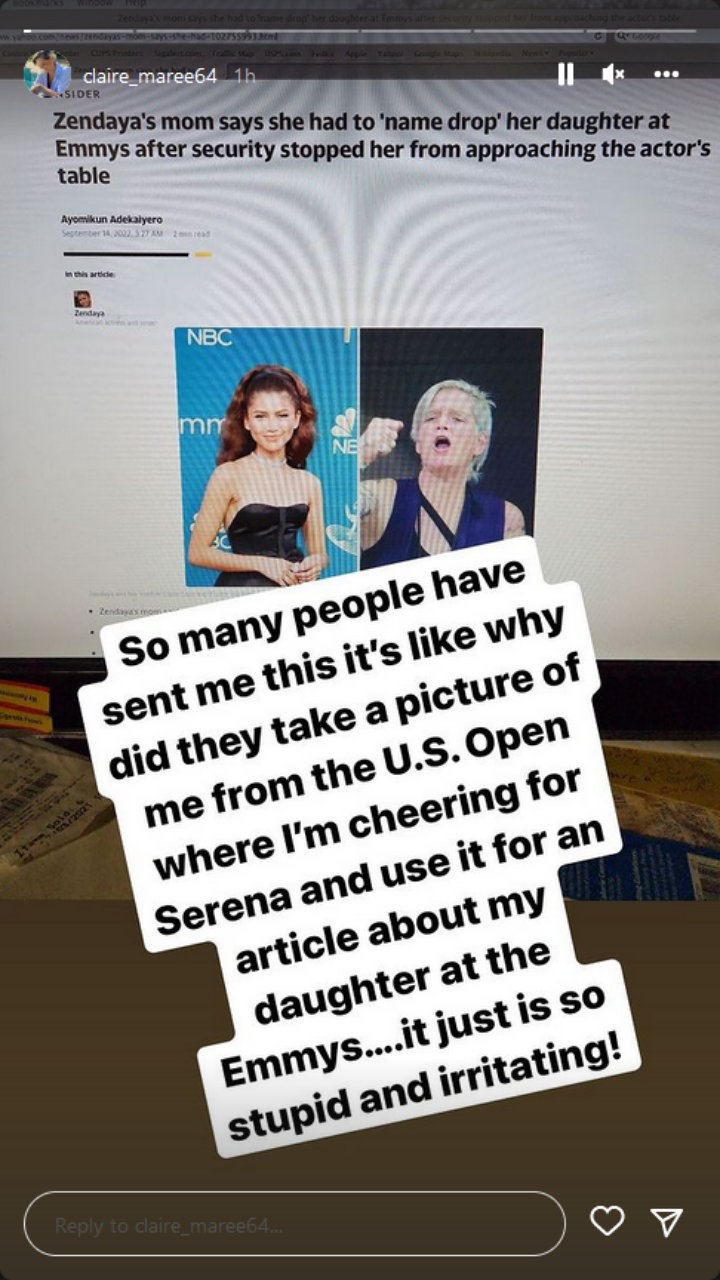 Claire blasted news outlets over their photo choices for articles about Zendaya at Emmys.

Zendaya won her second non-consecutive Emmy for Outstanding Lead Actress in a Drama Series for her role as Rue Bennett on HBO's "Euphoria" at the 2022 Emmys. "Thank you to the Academy, thank you to my friends and family, some of which are here tonight," she said in her acceptance speech, pausing to laugh as her mom cheered. "Thank you to Sam [Levinson] for sharing Rue with me, thank you for believing in me even in moments where I didn't believe in myself."

While her mom was on hand to support Zendaya at the event, her boyfriend Tom Holland missed the moment because he was busy filming in NYC. "Tom is Zendaya's biggest fan," a so-called insider close to tells HollywoodLife. "He's so proud of her, and he was bummed he couldn't be with her in L.A. for Emmy night."

The source adds, "But, she was totally fine with it. If anything, she encouraged him not to make the trip because she knows how demanding his shooting schedule is [for 'The Crowded Room'] right now and for her, work is always the priority."

"And it's not like they haven't had time together," the source assures, before noting, "He visited her in Europe last month and then she was with him [in New York] for her birthday [September 2]. And she was even able to visit him on-set last week."

On how the young couple maintains their relationship amid their busy schedules, the source explains, "They always figure out ways to see each other, no matter how busy they get. And even when they are apart, they're in constant contact, he's super proud of her and the most supportive boyfriend."

Linda Evangelista Named the 'Worst' Celebrity to Work With