A.J. McLean's Wife Asks People to 'Be Kind' After Their 9-Year-Old Daughter Changes Name to Elliott

The Backstreet Boys star's wife Rochelle McLean offers a clarification via her Instagram Story after her daughter Ava's name change apparently leads to questions from her followers.

AceShowbiz - A.J. McLean's daughter Ava is changing her name to Elliott, but it's "not a gender thing." The singer's wife has offered a clarification after she apparently sparked a lot of questions with a photo declaring the 9-year-old girl is now called Elliott instead of her birth name Ava.

On Wednesday, August 17, Rochelle McLean shared a sweet snap of her two daughters, whom she shares with the Backstreet Boys star, going back to the classroom after more than two years of homeschool. In the image, their eldest daughter held a pink balloon bearing the words "Elliott's first day of 4th grade!" while her 5-year-old sister's balloon read, "Lyric's first day of kindergarten!"

In the caption, the proud mom wrote, "After two and half years years of homeschool, these two beauties are back to school! Lyric is starting kindergarten and Elliott (Ava) is in fourth grade!" She went on gushing, "I can't believe it! I'm so proud of these girls. As much as I am going to miss them, I'm excited to watch them spread their wings and fly!"

Rochelle's post apparently sparked a flurry of questions regarding Elliott's name change, prompting her to take to her Instagram Story to explain it. "For those asking… not that it's anyone's business but Elliot's name change is not a gender thing," she wrote.

The 40-year-old makeup artist and hairstylist further divulged, " 'Ava' has changed her name quite a few times since she was about five. Last year she asked us to start calling her Elliot and it stuck. She wanted something unique that no one else had. (There are so many Ava's.)"

Being a supportive parent, she shared, "I didn't really see the harm in respecting her desire to be unique. Come to think of it, it's a little odd that as parents we choose names for people we haven't even met yet and expect them to forever [identify] as that person!" She continued, "Anyway… so that's how Ava became Elliot." 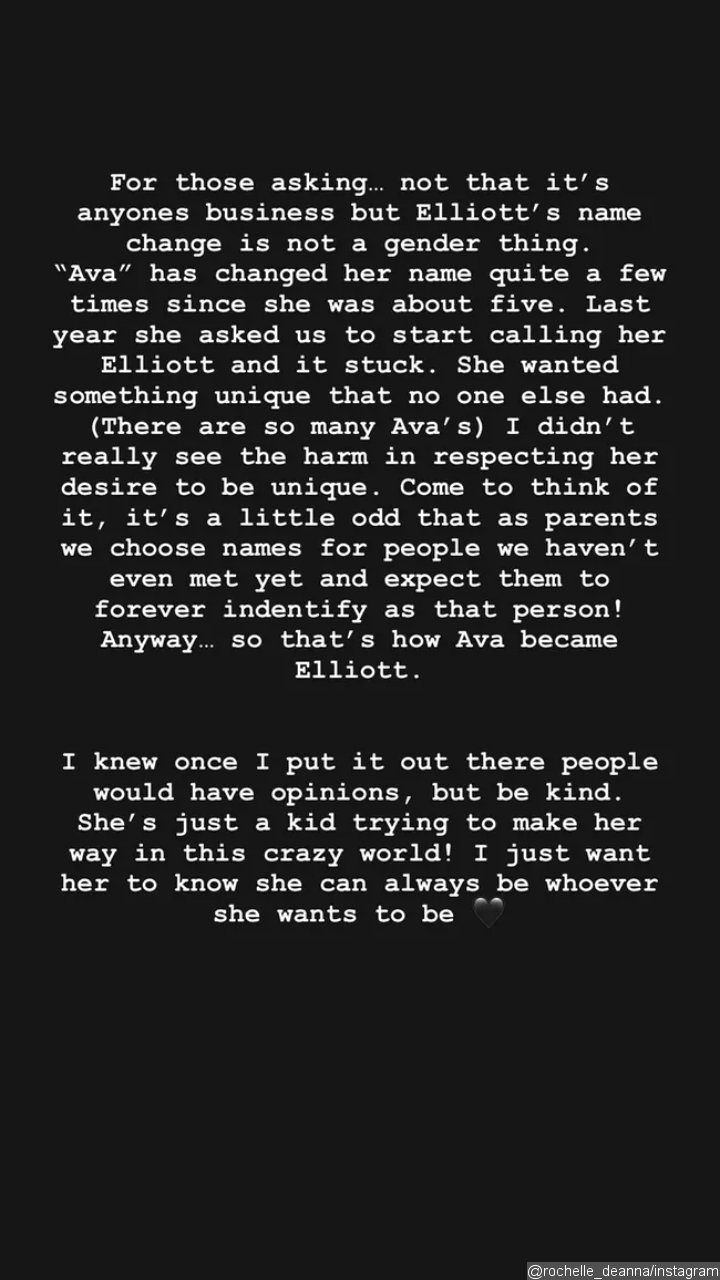 Rochelle also asked her followers to react positively to the news. "I knew once I put it out there people would have opinions, but be kind. She's just a kid trying to make her way in this crazy world!" she implored, before concluding her lengthy message, "I just want her to know she can always be whoever she wants to be."

A.J. McLean Supports 9-Year-old Daughter as She Changes Name From Ava to Elliott

A.J. McLean Gets Insecure About His Neck and Jawline, Undergoes Cosmetic Surgery to Fix Them