Teddi shares on Instagram Story a screenshot of her alleged text exchanges with the retired MLB star, who is 'so angry' after the two ladies clowned his and Kortnie O'Connor's wedding invitation on Teddi's podcast.

AceShowbiz - Jim Edmonds wasn't happy with a recent episode of Teddi Mellencamp's "Two T's in a Pod" featuring his ex Meghan King. He apparently reached out to Teddi to call them out after they cringed over Jim and Kortnie O'Connor's wedding invitation in the Thursday, July 28 episode of the podcast.

On Sunday, July 31, Teddi took to her Instagram account to share a screenshot of her alleged text exchanges with Jim. In the screenshot, the retired MLB star asked her if Meghan had sent her a copy of the invite. "Hard to believe that out of 18 we sent to our close friends, 1 found its way to you," he added.

To that, Teddi responded, "She did not. I blindsided her. I got a dm with it when I posted on Instagram saying what questions do y'all have for Meghan." Jim, however, didn't easily buy it as he asked Teddi to show the said DM.

The former "The Real Housewives of Beverly Hills" star refused. "I am not going to out the person but I give you my word," she argued, before adding, "I will happily have cortney on the pod to discuss and apologize for showing it."

Jim didn't give in as he asked Teddi to show the DM without the person's name. "I don't believe anything that comes out of my exes mouth so how should I trust you?" he continued. He was also against the idea of his girlfriend coming to the podcast as he wrote, "Why would she want to come on your podcast after you literally just laughed at our so-called wedding invitation that you read completely wrong on the air."

In her reply, Teddi claimed that she didn't plan to fight with Jim as she noted that the invite was posted on someone's Instagram Story. "I can apologize but that's where I leave it," she concluded. The former Bravo personality captioned the picture, "Ooof Jimmy is so angry. Tried to apologize." 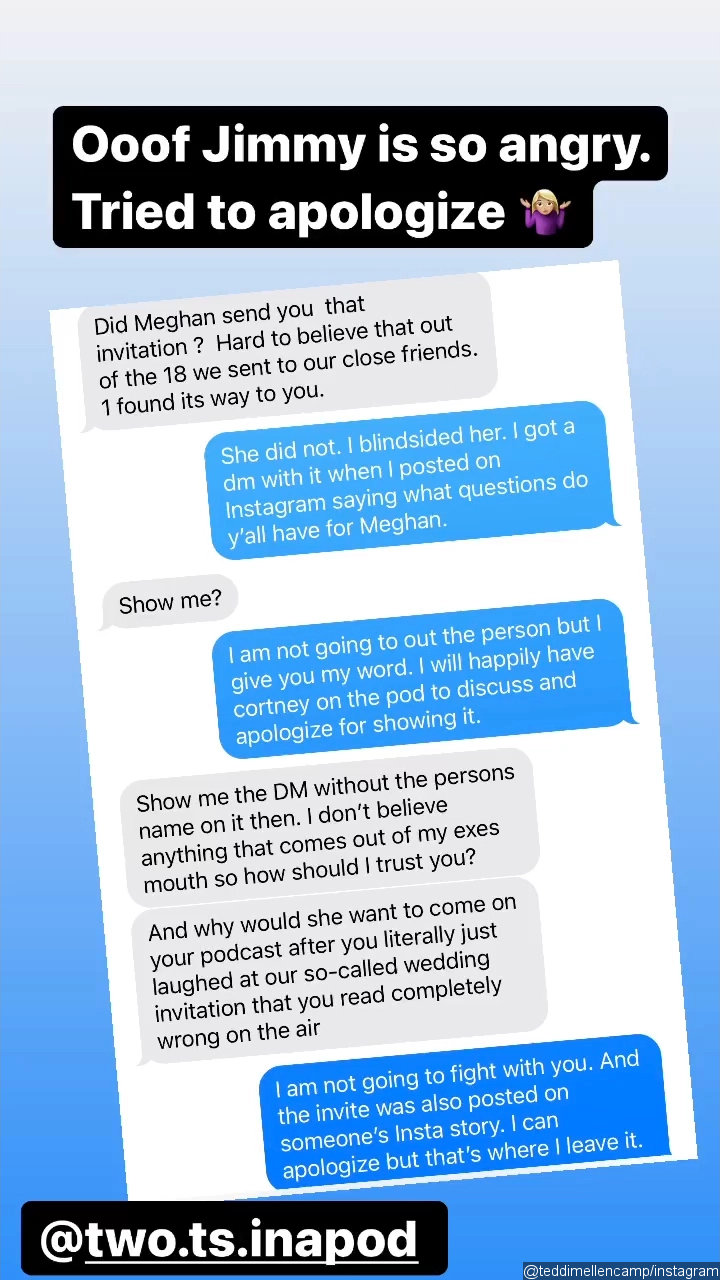 Teddi Mellencamp claimed Jim Edmonds was angry over her and Meghan King's reactions to his wedding invitation.

In the Thursday episode of Teddi's podcast, the host and Meghan discussed the James Bond-themed invite. According to Teddi, the invite read, "Ladies, be inspired by your favorite Bond girl. Gentleman: black tie or a white coat like James [Bond]."

Teddi described it as "so cringe" while Meghan said that it was her first time seeing it. "The Real Housewives of Orange County" vet added, "Okay, alright, I mean everyone has their different style. I mean, it's implied [that Jim is James Bond]."

Chris Brown Laughs at Himself After Ripping Pants on Stage

Jim Edmonds on Meghan King and Cuffe Biden Owens' Wedding: 'I Thought It Was a Joke'