The Phoenix Suns player shares pictures of a waterfall, which strikes an uncanny resemblance to the waterfall in the 'Kardashians' star's older Instagram post.

AceShowbiz - Devin Booker and Kendall Jenner continue to drop hints at their relationship status following their alleged split and subsequent reconciliation rumors. The NBA star has seemed to confirm that he and the model were vacationing together.

On Thursday, July 28, Devin posted on his Instagram page a picture of him standing in front of a rocky area with vibrant blue water. He captioned the post, "trek king." The Phoenix Suns player also took to his Instagram Story to share a picture of a waterfall, adding a thumbs-up emoji.

While Devin didn't feature or mention Kendall in his posts, fans couldn't help noticing the similarities in his pictures and Kendall's older posts. Two weeks ago, the reality TV star shared photos from her tropical vacation which showed similar waterfall as the one seen in Devin's pictures. 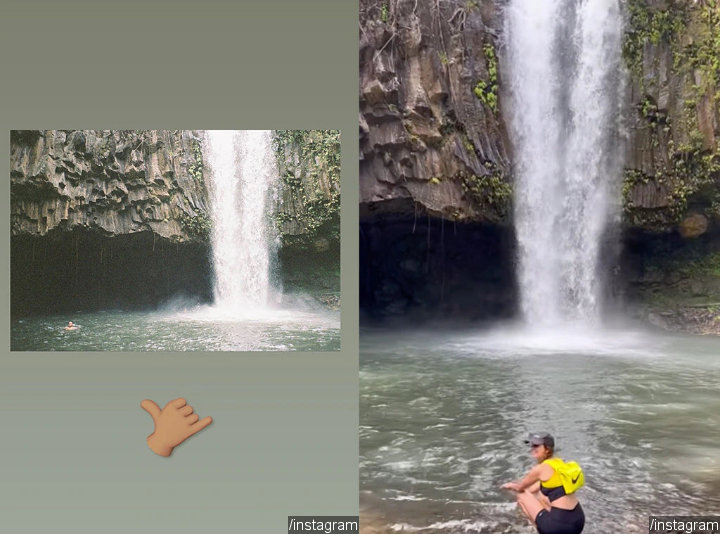 On July 14, Kendall additionally posted a video of her on the beach. A further look at the video revealed a person floating in the water behind her, leading fans to speculate that it was Devin.

Kendall and Devin, who were first linked in April 2020, reportedly decided to spend time apart after returning home from Kourtney Kardashian's Italian wedding to Travis Barker. "They had a really nice time in Italy together," a source said. "But once they got back, they started to feel like they weren't aligned and realized they have very different lifestyles. Kendall told Devin she wanted space and time apart."

Just days later, however, they were photographed hanging out at the SoHo House in Malibu, California. During their reunion, they're all smiles as they cozied up next to each other outside at the private membership club. At one point, Kendall was seen giggling as Devin whispered something in her ear.

"They looked very cozy," an eyewitness told InTouch of the outing at the time. "They were hanging out on the second floor. Everyone was having fun!"

Later on July 17, Kendall shared a picture of her attending a friend's wedding. In the snap, she posed with a mystery man who stood behind her. Some fans believed that the man could be Devin.