Anson, who played Warren 'Potsie' Weber on the hit sitcom, is hoping to be elected to office after announcing his intention to run at a city council meeting which was held on June 28.

AceShowbiz - Former "Happy Days" star Henry Winkler is supporting his former castmate Anson Williams who is running for mayor in the city of Ojai, California. Having swapped show business for politics, Anson is hoping to be elected to office after announcing his intention to run at a city council meeting which was held on June 28.

According to the Ojai Valley News, Anson declared the city needs "leadership that inspires a collaborative team." All mayoral candidates can formally declare their candidacy by securing paperwork with the City Clerk's on July 18.

The Los Angeles Times reports the actor will be going up against current Mayor Betsy Stix, who is running for reelection. Anson already has the support of his former "Happy Days" co-star Henry, who retweeted a story about his old pal's plans. He publicly declared, "You have my vote." 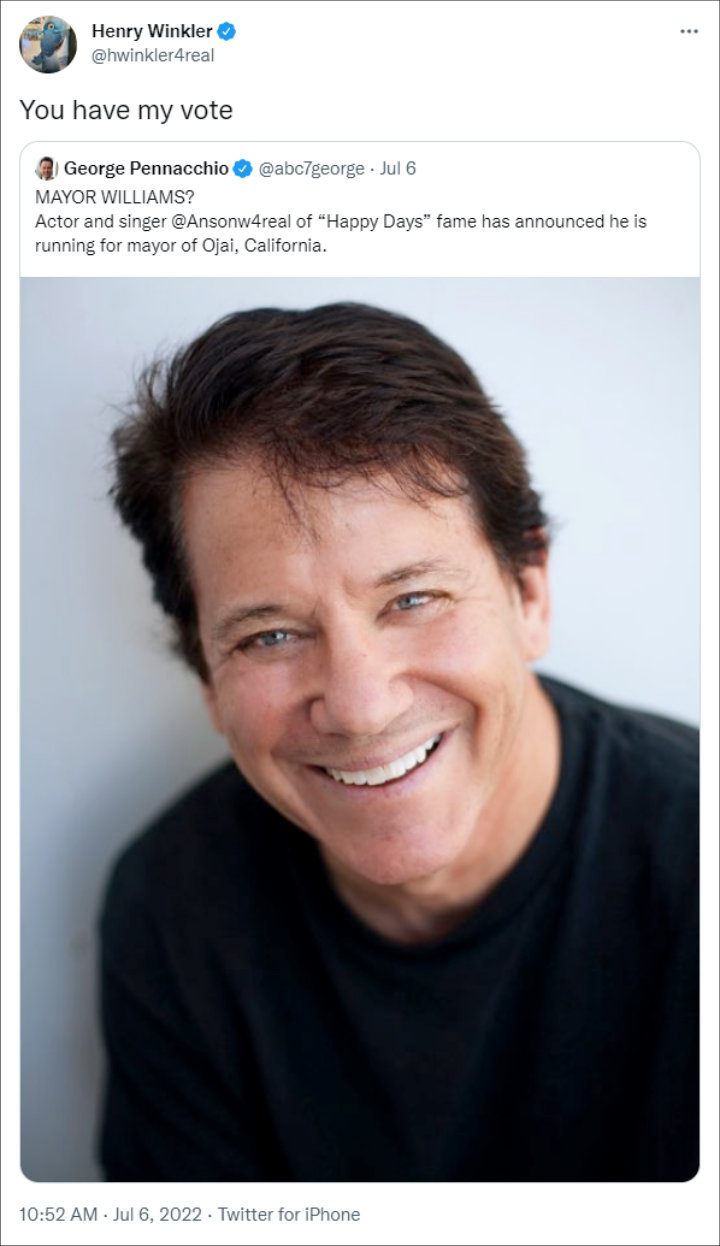 "Happy Days", which saw Anson playing Warren "Potsie" Weber, came to an end in 1984. Since then, he continued to work in Hollywood in behind-the-scenes roles as a producer and director. He produced 1980 film "Skyward", which was directed by his former "Happy Days" castmate Ron Howard, while he also directed episodes of shows including "Baywatch", "Beverly Hills, 90210", "Star Trek: Voyager" and "Deep Space Nine".

Anson previously told the Los Angeles Times the "Happy Days" cast were encouraged to follow their filmmaker dreams by the show's executive producer, Garry Marshall. "He opened the doors of the Paramount lot so we could watch other directors direct, edit, whatever we wanted to do," he explained.

He added, "He thought it was very important for us to learn all sides of the business because we may not be acting all of our lives. We were young and we didn’t know what we wanted to do, so maybe another area would inspire you."

Victoria Beckham Credits Her Mom for Inciting Her Passion in Fashion